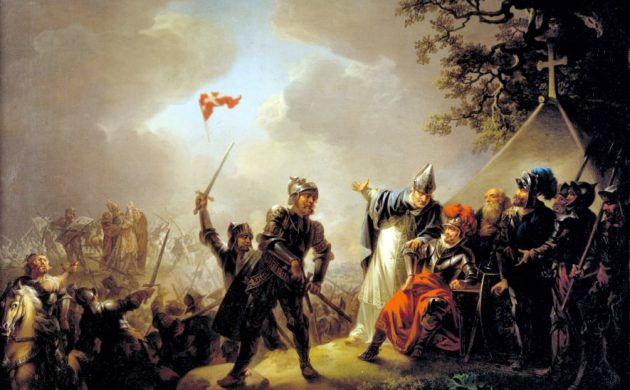 Some of you might have seen the flags on the buses today and thought “Not another birthday!”

And you’d be right, but this time it isn’t the birthday of a royal, rather Valdemar’s Day, the anniversary of the Dannebrog, the country’s national flag.

Not just a Danish story
Much of the flag’s history comes from sources other than Danish. The name ‘Dannebrog’ probably derives from the Frisian word ‘dan’ (red) and ‘broge,’ meaning white cloth. The flag is first encountered in the late 14th century in a reproduction of the coat of arms of  King Valdemar IV the Victorious (Valdemar Atterdag), who was probably the first Danish king to use the red banner with white cross.

Valdemar grew up at the imperial court in Aachen (Aix-La-Chapelle) in today’s Germany, and it was there that he doubtless came across the red banner of the Holy Roman Empire with its white cross. The Holy Roman Empire is the name applied to the complex of European territories under the rule of Charlemagne, King of the Franks and Roman Emperor (crowned in 754) and his successors of the German Empire which went on until 1806 – a sort of continuation of the original Roman Empire.

According to legend, the Dannebrog is said to have dropped from heaven at the Battle of Lyndanisse in Estonia in 1219 during Valdemar’s crusade to the Baltic states, but the flag’s association with Denmark can only be testified to about 150 years later. One theory is that the Danish flag with the white cross on a red bunting was a gift to the Danish king from the Pope for his crusade against the eastern pagans. Tallinn, the Estonian capital, founded originally by Valdemar, means ‘Danish City’ and a white cross on a red ground figures in its city arms.

Love the lore
The legend goes that the earliest Dannebrog was captured by the Ditmarshers in northern Germany in 1500, to be retrieved by King Frederik II and deposited in Schleswig Cathedral (then Danish territory), where the last remains of the flag, eaten away by damp and age, disappeared a century later. A flag in the Maria Church in Lubeck, probably from the wars against the Danes in 1427 and the oldest surviving Dannebrog, was destroyed in the air raids of World War Two.

In a song dating from 1500, the red-and-white banner is associated with the Roman Emperor Constantine the Great’s dream of the cross at the Battle of the Milvian Bridge outside Rome in 312 AD. It was during this campaign that Constantine, first Christian emperor of Rome and founder of Constantinople, was said to have seen a vision of the cross of Christ superimposed upon the sun, accompanied by the words: ‘In hoc signo vinces’ (In this Sign Conquer) establishing the white cross as a dominant motif in crusader flags.

Shortly before 1200 the the red flag with white cross replaced the original, completely red, flag of the Holy Roman Empire, on which the Emperor superimposed a white cross when he embarked on crusades. Long before becoming the national flag of Denmark, the red-and-white flag was used by the Portuguese Order of Christ during an early 14th century crusade against the Moors as well as being adopted by the Duchy of Savoy (Savoie), now a part of France, and used similarly to give crusades the imprimatur of the Holy Roman Empire. Similarly the myth of the Dannebrog falling from heaven is related to Constantine’s miraculous vision, first appearing in a Portuguese version.

Flag frenzy
‘It is nonsense to call the Dannebrog the oldest flag in Europe, it is a copy of the Holy Roman Empire’s flag which is much older,’ Nils G. Bartholdy, heraldry expert at the Danish State Archives says. ‘Lots of countries have flags with crosses, look at the banners of the other Scandinavian countries and the flag of England – the cross of St. George – which is just the Dannebrog in reverse.’

Unperturbed by all this, nationalistic Danes use their flag more than most other nations; the Dannebrog can frequently be seen flying outside private homes, allotment gardens or summer houses, to mark festive family occasions, such as Christmas, weddings and anniversaries.

Nationalism is a strange phenomenon – in Britain, where you can buy Y-front men’s underwear in the design of the Union Jack flag, anyone flying the British flag on a pole in his back garden would be considered a complete crank. Over here on the other hand, the Dannebrog has become an all purpose symbol of celebration, used at office parties, festooning Christmas trees and decorating cakes at birthday festivities.