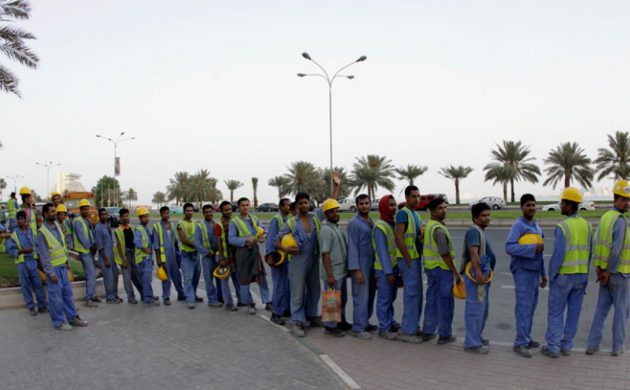 The Danish football association, the DBU, has been one of the most vehement detractors of Qatar hosting the FIFA World Cup in 2022 due to numerous reports of human rights abuses of migrant workers building the new stadia and infrastructure required to host the event.

So to waylay such criticisms, the DBU and the Danish union confederation LO were part of a Nordic delegation invited by Qatar to inspect the conditions of the migrant workers toiling in the desert sun to get the nation ready for the world’s biggest sports event.

While the DBU, currently busy with its own in-house dilemma over its wage agreement with the national team, has yet to comment, LO has not pulled any punches.

Echoes of Theresienstadt
The deputy head of LO, Morten Skov Christiansen, said he knew ahead of the visit that the delegation wouldn’t see the reality well-documented by Amnesty International and other human rights organisations.

“They showed us a model town taken right out of a film,” Christiansen told Ekstra Bladet tabloid.

“It couldn’t have been nicer.: lush green grass everywhere, flowers, nice football pitches with artificial turf, basketball courts, big halls for eating, and rooms for relaxation and leisure. The only problem was that it was obvious it hadn’t been used.”

Christiansen said it was clinically clean everywhere, and the only hole in the dartboard was the one the darts were buried in. Moreover, there were no balls for the table football machine, and many in the delegation felt they were part of some kind of strange hidden-camera ploy.

The delegation saw 10-15 migrant workers kicking a football about, which they felt was odd considering it was Tuesday morning, and that they normally work from the early morning through to late at night.

“We spoke with ten workers from Nepal, India and Bangladesh at a secret meeting and we were given specific examples of the challenges migrants face. They lived as 90 percent of the migrant workers do: in very unsanitary and unhealthy conditions,” said Christiansen.

“One of them said that 60 people had to share one kitchen, and that he had to get up at 03:00 in the morning to cook food. Another lived in a small room with eight other people, while a third hadn’t been paid in three months and couldn’t do anything because his employer had taken his passport.”

Christiansen said the stories matched those told by the human rights organisations.

According to the International Trade Union Confederation, 1,200 migrant workers from Nepal and India have died in Qatar since the country won the right to host the World Cup back in 2010, and a total of 4,000 are expected to die before the first game kicks off in 2022.

Meanwhile, Qatar has told the Nordic delegation that just four people have died in connection with the World Cup preparations, and just one was directly related to the actually construction site.