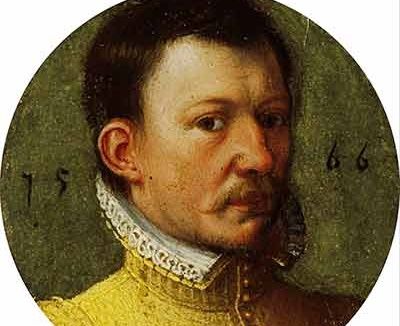 The Earl of Bothwell, a wild adventurer who died in Danish captivity, and the chapel near Holbæk where his remains are buried (photo: Unknown)
January 5th, 2017 7:10 pm| by Christopher Follett

The earl of Bothwell remains in Denmark. His remains are entombed in Faarevejle Church, near Holbæk in northwest Zealand, for all to visit, 425 years after his demise.

And if Bothwell doesn’t sound like a particularly Danish name, it’s because it isn’t, it’s Scottish. And in this case, he was the third husband of that country’s most famous female monarch, Mary Queen of Scots.

In 1578, James Hepburn, 4th Earl of Bothwell, Duke of Orkney and High Admiral of Scotland, died in captivity at Dragsholm Castle, northwest of  Copenhagen. He had been a prisoner of the Danes since 1567 and is thought to have gone mad.

Bothwell, a wild adventurer, was almost certainly behind the murder of Henry, Lord Darnley, Mary’s second husband. After Mary lost the Scottish throne, Bothwell was captured at sea and taken back to Denmark where he was treated with the respect due the consort of foreign monarch. However, once it became clear that Mary’s cause was doomed, Bothwell was imprisoned.

Mary quite contrary
Mary Stuart, a tall, slender 16th century Catholic femme fatale with reddish hair and amber eyes, returned at the age of 18 to Scotland in 1561, a year after the death of her first husband, France’s King Francois II.

After the Bothwell affair, she was imprisoned by Queen Elizabeth I for 18 years in Fotheringay Castle in England prior to being beheaded in 1587 for allegedly plotting against the English. The degree of Mary’s complicity in the murder of Darnley, who himself killed David Rizzio, the queen’s Italian private secretary, was just one of the many controversial aspects of her stormy, tragic life.

Both Mary and Bothwell died in their early 40s. The earl’s fate was cruel too. Tried and acquitted of the murder of Darnley, he abducted Mary and married her, all within the space of a few months in early 1567. A revolt ensued and Hepburn was forced to flee Scotland alone, while Mary departed for England. The earl was then arrested in his ship off Bergen, Norway in September 1567 by the Danish-Norwegian Navy, where he was found without papers.

Doomed in Denmark
In 1573, the earl was moved to Denmark and incarcerated in Dragsholm Castle. During his long imprisonment, Bothwell became something of a pawn of international politics as well as a decided thorn in the side of the Danish king, Frederik II. While England’s Queen Elizabeth demanded his extradition and  execution, King Charles IX of France called for his release. The problem was resolved by Bothwell’s death in prison in the dark, damp dungeons of Dragsholm in 1578.

Bothwell’s mummified corpse was displayed until the mid-1970s in a glass case in Faarevejle Church, near Dragsholm Castle, where generations of Danes became acquainted with his fate. He became perhaps the most famous Scot in Denmark.

In his mummified form, the earl became a part of the Danish national heritage. He was the only body in Denmark to be displayed in such a manner.  But his remains began to seriously deteriorate. After much public outcry from Danes who felt that such exposure of the husband of Mary Queen of Scots was indecent, the body was finally placed in a pseudo 16th century tomb in 1976 at the expense of the Ministry of Culture.