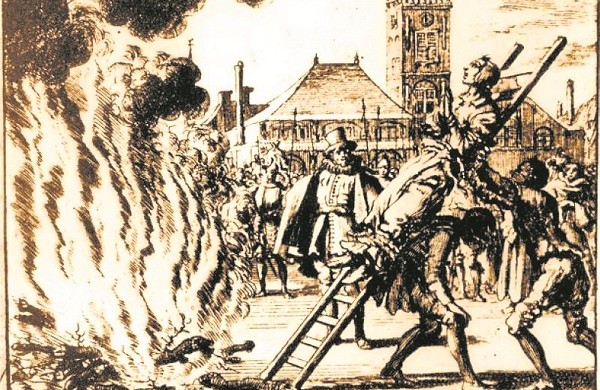 Ahead of this year’s Skt Hans Aften, it is worth considering that the rag-doll Guys put on British bonfires on November 5 might be symbolic of an actual historical person, but the fire itself does not recreate a event. Effigies of Guido Fawkes are burnt because he tried to blow up the Houses of Parliament in London on 5 November 1605 – he paid for it by being, along with his co-conspirators, drawn, hung and quartered.

But in Denmark, the burning of rag-doll ‘witches’ on Skt Hans Aften on June 23 – lovingly stitched together by schools, embroidery groups and church choirs – are symbolic of actual historical events. During a period now commonly referred to as the Burning Times, between 1540 and 1693, the prosecution of women (and also men) for witchcraft peaked.

Far from the worst
Between 30,000 and 100,000 witches were killed in Old Europe – some countries killed less than ten (Portugal and Ireland), while others (Germany most particularly, followed by Switzerland and France) killed tens of thousands. In most of these countries, they tended to be hung, but in Denmark and Norway (part of Denmark until 1814), where 1,350 were killed, the preference was to burn them.

So take away the monotonous speeches of local councillors and the kids’ entertainment, and the June 23 pyres bear a striking resemblance to those used to burn hundreds of witches throughout Denmark in the 1500s and 1600s. Of course, today the witch is made of straw and rags, and the screaming you hear as she burns is the sound of her firecracker stuffing going off.

The ‘witches’ of Ribe
Denmark’s most famous ‘witch’ was Maren Spliid, the wife of a successful and wealthy tailor in the Jutland market town of Ribe. What makes her story, which seems so similar to all the other tales of witchcraft from the period, so notable is hard to pin down: perhaps it was the fact that Spliid was a well-known and respected member of her local community, and that she fought hard for her innocence, and that ultimately, her fate was decided by none other than the king.

Spliid was an independent businesswoman, and ran a successful inn in Ribe. While she could make herself unpopular with her sharp, biting tongue (a woman’s tendency to fight her battles with curses instead of steel was precarious to say the least in those days), she appeared to be generally respected by her customers. In 1637, however, Spliid was accused by one of her husband’s business rivals, Didrik the Tailor, of sorcery.

Didrik claimed he had been woken up by three witches, one of whom was Spliid, who had blown  into his mouth. The following day, after feeling sick, he vomited up an object he believed to be moving. Upon showing the object to them, several priests and the local bishop declared

this object to be of unnatural origins. The case went to trial in Ribe, but Spliid’s husband stood by her and managed to get her acquitted.

Tailor-made to burn
Didrik did not stop there, however: he found witnesses to support him and went to the king, Christian IV, who declared the case reopened. In 1640, Spliid was asked to find 15 character witnesses to swear her free of the charges, which she could not do, and she was thus found guilty. A higher court, however, acquitted her of all the charges.

The matter was then brought before the highest court in the land – one presided over by King Christian IV himself. Spliid was taken to the Blue Tower in Copenhagen Castle, where she was tortured for days prior to her trial – a procedure common in witchcraft trials, though prohibited by a Danish statute from 1547. Spliid eventually buckled and admitted her guilt, naming six women as part of her ‘coven’, after which she was pronounced guilty and transported back to Ribe to be publicly executed.

It is reputed that so many people turned up to see Spliid’s execution that the priest could barely make it through the crowd that had gathered on Galgebakken hill. After being given half a pitcher of mead to steady her nerves, Spliid was tied to a ladder and thrown into the fire.

Witchhunter king
Almost all the trials took place while Christian IV was king of Denmark and Norway. During his reign, a law was passed that determined the practice of sorcery or witchcraft to be a crime, but with his death, the hysteria surrounding witchcraft faded away.

The last woman to be executed for witchcraft in Denmark was Anne Palle in 1693: after a week’s imprisonment in Nykøbing castle, she was spared the fate of burning to death and instead beheaded and tossed into a fire.

Was religion to blame, or men?
Carl Dreyer’s 1943 film ‘Vredens Dag’ (‘Day of Wrath’) paints a fairly accurate picture of how witches were executed in the 1600s. It was itself an adaptation of Norwegian playwright Hans Wiers-Jenssen’s 1909 drama ‘Anne Pedersdotter’, the story of a witch’s trial, which has an air of sexual intrigue and covert affairs.

However, the sexual content of the play, and other literature on the subject, might be a little misleading as it gives credence to a school of thought first aired in the late 19th century that many of the witches burnt during this period, and in the centuries before, were women who had disagreements with powerful men – for example, either as a midwife and practitioner of alternative medicine, or simply turning down their sexual advances. In Ken Follett’s ‘The Pillars of the Earth’, for example, it is a reoccurring theme.

Championed by the recent neo pagan revival, which is 200,000 strong in the US alone, this theory puts the death toll of the patriarchal-driven European gynocide at nine million. But archival evidence refutes these claims – both the numbers of women killed and the nature of most cases.

Citing the archival evidence, most modern historians today tend to concur that the vast majority of women killed were victims of the Catholic Church’s will to impose their religious orthodoxies. And besides, at least 20 percent of all the witches burnt during the Burning Times were men.