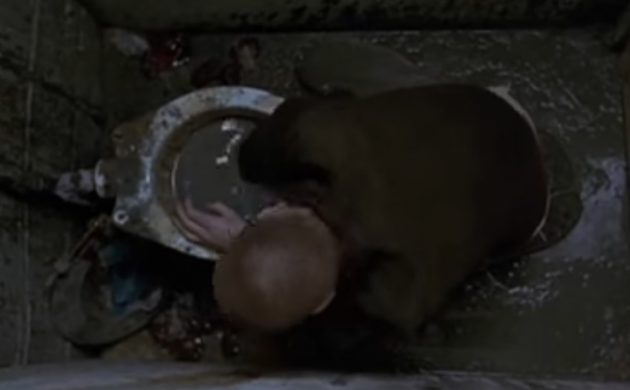 No doubting this is a toilet though, although it was chocolate doubling for excrement apparently (photo: screenshot from Youtube)
May 1st, 2017 5:00 pm| by Ben Hamilton

We only have the script’s word for it that Mark Renton has the misfortune of stumbling upon, and then into, “the worst toilet in Scotland” in that memorable scene in ‘Trainspotting’.

And likewise we’ll have to accept the opinion of archaeologists working at Museum Sydøstdanmark that a two-metre hole discovered at the Viking settlement of Strøby Toftegaard in southern Zealand is “the oldest toilet in Denmark”.

Of course, they could be talking shit.

Seeds, pollen, shit …
“It was previously imagined that people used their stools as fertiliser [in the same way they used their animal dung] or simply did their business in the stables,” Anna S Beck, a PhD student at the museum, told Videnskab.dk.

Any misconception that the hole was a workshop or a store for seeds or other crops was discounted by the confirmation that the bottom soil layer consisted entirely of faeces, she explained.

Archaeologists are confident the excrement is from humans due to a high content of pollen that was probably derived from honey, which livestock doesn’t eat.

Not the first discovery?
While toilets have been discovered in Viking towns before – the sheer numbers would have made them necessary, concluded historians – this is the first time one has been found in a humble rural settlement.

This discovery has led to archaeologists questioning whether they had overlooked other shitholes at past digs – that the soil layer they previously assumed was phosphate and rubbed together in their hands was in fact human turds.

“I was somewhat surprised when the analyses from the soil samples came back [from Nationalmuseet],” furthered Beck.

“We may have recorded thousands of these before and discounted it as being shit. When you dig in the cities, you are rarely in doubt – the smell is often a giveaway.”

Toilet theory unlikely
Kjartan Langsted from Museum Nordsjælland does not believe the hole found in Stevns Municipality is a toilet.

Up until the mid-19th century, they would have only been found in a posh rural environment, not in the likes of Strøby Toftegaard, he contends.

“Today, going to the toilet is a very private affair, but not back then. Everything was a resource and had to be used,” Langsted told Videnskab.dk.

“I do not completely reject the idea, but I would imagine the excrement ended up in the hole for another reason.”