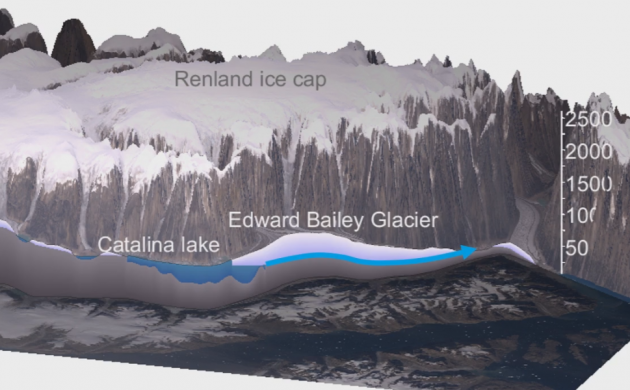 Researchers from the Niels Bohr Institute at the University of Copenhagen have discovered that Lake Catalina in Greenland has had four freshwater outburst floods over the past 50 years.

The interesting thing is that every outburst flood has released energy equalling upwards of 240 Hiroshima bombs and no locals or anyone in the scientific community has noticed it happen. Furthermore, a new drain is just around the corner.

“These colossal outbursts from Lake Catalina were detected by mere chance,” said assistant professor Aslak Grinsted, who led the study.

“We learned that a number of different satellites have taken photos of Lake Catalina over the last 50 years from 1966-2016. These pictures are now freely accessible, and when we decided to take a look at them and soon after started to compare them systematically, they provided information about remarkable fluctuations in the water level of the lake.”

READ MORE: Tsunami waves that struck Greenland some of the highest ever recorded

Trillions of litres
The research team found that a total of four outburst floods had taken place over the past 50 years – all during the winter months between November and March. The first took place in the period 1966-1972, the second in 1988-89, the third in 2003-04 and the most recent in 2011-12.

Using collected data, the researchers have also managed to produce a model which, with some degree of certainty, can predict when the next outburst flood will take place. It will occur in 2023 at the latest, or during the winter of 2018-19 at the earliest.

Lake Catalina is surrounded by glaciers and as meltwater runs into the lake, the water level increases until the water tunnels below the glacier and eventually drains a flood volume of 2.6-3.4 cubic kilometres of freshwater.

The 3.4 cubic km may not sound like much, but it’s actually 3.4 trillion litres. In fact, a 3.4 cubic km bucket could fit the entire population of Earth six times over. It ranks in the top five in history in terms of the largest documented freshwater drains.

Global warming impact
The team also found that the frequency of outbursts was increasing in connection with increasing temperatures in the Arctic region.

“Right now a new outburst is building in the lake – and based on our observations we can see that over the period from 1966 to 2012 the intervals between these outbursts from Lake Catalina have shortened concurrently with  rising temperatures in the Arctic regions,” Grinsted noted.

“However, this shortening of intervals between outburst floods is hardly specific for Lake Catalina. We are seeing a global increase in temperatures these years – and what we have documented in Scoresbysund Fjord therefore might indicate that ice-dammed lakes all over the world are in the process of becoming more unpredictable and potentially more dangerous because outbursts and flooding can occur at shorter notice than historically experienced. By following Lake Catalina closely one might hope to get information that can be utilised when monitoring ice-dammed lakes all over the world, and we will now try to secure funding for further research.”

The research will be published in the scientific journal Scientific Reports this week.