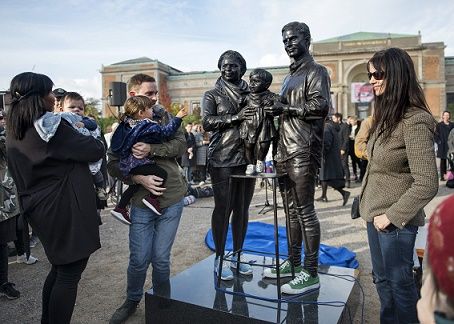 The winning real Danish family, the sculpture and on the right, Gillian Wearing (photo: Heine Pedersen)
October 19th, 2017 6:00 am| by Stephen Gadd

An exhibition of the work of Birmingham-born Turner Prize-winning artist Gillian Wearing has just opened at the Danish National Gallery, SMK.

Entitled ‘Family Stories’, it is really an exhibition in two parts. The first half contains a retrospective of Wearing’s work, the second explains the creative processes that went into the work/project ‘A real Danish family’. This was a co-operation with Danmarks Radio, Kunsthal Aarhus and SMK, culminating in a bronze sculpture of the winning family that can be seen outside the museum.

A wry eye
The overarching theme in Wearing’s art is people – and relationships in all their forms. This may sound worthy, lofty and serious, but another characteristic of her work is that much of it is great fun. Wearing frequently takes references from pop culture and turns them upside down.

Room one starts with a series of large photographic portraits of Wearing and members of her family. On the surface there is nothing unusual about them, except perhaps their size. However, when you look closely, you can see that all of them are in fact the artist herself wearing extremely intricate wigs and silicone masks.

People have used masks since the dawn of time, from tribal shamans to actors in Ancient Greece and the Kabuki theatre. They enable the wearer to take on a new personality. When asked, Wearing said she was using the masks in terms of assuming another persona but also as a device to examine another person from within – a way of ‘walking a mile in their shoes’ if you like.

Putting words in other people’s mouths
In a number of video installations, Wearing experiments with mixing and reversing roles. For example, in ‘2 into 1’ we see what appears to be a normal family situation, with two twin boys in school uniform talking about their mother and then shots of the mother talking about the boys. However, the words of the mother are being lip-synced by the boys – and vice versa.

The role reversal theme is used again in another video installation ’10-16′, in which children aged 10 to 16 tell a story but that story is acted out and lip-synced by adult actors. For the age of 11, we see an apparently tranquil scene, with two middle-aged women in a park on the grass having a picnic. One of them suddenly says: “It is important to be tough, but every time I hit someone, I think why did I do that?” The effect is totally incongruous, but it is easy to imagine the words themselves coming from the mouth of an 11-year-old.

Charming charms and cryptic signs
Another stand-out work is called ‘My mother’s charms’ – a title that works on a number of levels. The piece is a giant charm bracelet with the 20 ‘charms’ hanging from it consisting of anything from a Danielle Steel novel to a flip-flop, keys, a diary, photo etc – all things that Wearing considers important in her relationship with her mother.

Finally, a large collection of photos fills a wall with the somewhat ponderous title ‘Signs that say what you want them to say and not Signs that say what someone else wants you to say’. Random members of the public were approached to write a slogan on a piece of paper and then be photographed holding it. The results are often surprising, sometimes enigmatic. What is one to make of the well-dressed, prosperous-looking young man holding a sign saying “I’m desperate”? Or the policeman standing in what looks like Covent Garden with a sign reading just “Help”?

What is a Danish family nowadays?
The second half of the exhibition is given over to the ‘A real Danish family’ project. In 2016, families all over Denmark were invited to apply for consideration to be cast in bronze. The competition received 492 entries and a panel of five judges – a musician, a researcher/pundit, a philosopher, the head of SMK, and a co-founder of the think-tank CEPOS – whittled these down to ten finalists. A full-sized bronze sculpture was then made of the winning family. The whole process was documented at every stage by Danish television in a three-part series.

In the rooms here there are a great many of the photos of the families who entered, plus computers available showing the DR program. Interesting though the project undoubtedly is, it seemed a bit difficult to come to grips with fully because I had not seen the TV programs that go with it. However, the sculpture outside the museum can certainly be enjoyed on its own terms as well as being a successful culmination of the project.

The first half, though, is a great opportunity to enter Wearing’s world and explore the human condition with her.