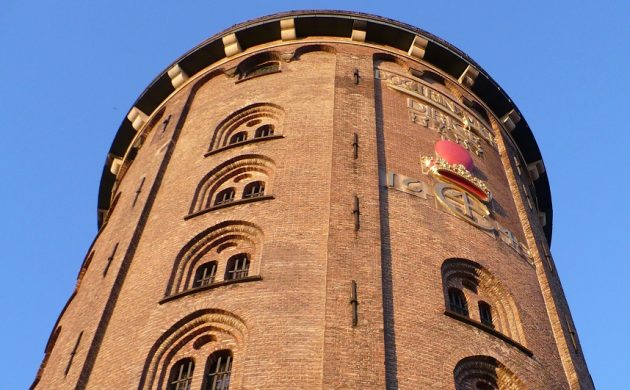 Copenhagen is a city of shapes. From its rectangular lakes and numerous squares to the Trianglen junction in Østerbro, it’s like a gigantic children’s shape puzzle. Furthermore, the whole city is shaped like a massive hand with fingers shooting off north, west and south.

So where’s the round peg, you might ask. Smack in the middle of the city is the answer, where it’s stood since the mid-17th century. After the Little Mermaid, the Round Tower (Rundetaarn) is Copenhagen’s most famous landmark – a colossus towering over the city centre that in reality is only seven storeys high.

A towering influence
Located on Købmagergade close to Nørreport Station, the capital’s busiest transport hub, the tower was constructed under the orders of Christian IV as part of the ‘Trinitatis Complex’, an ambitious plan to combine an observatory, church and library together within one building. Christian IV’s dreams were realised when the tower was finally completed in 1642.

Nevertheless, many attribute the vision of the tower to a man who at the time of its opening had been dead for 41 years. Tycho Brahe, a pioneering genius who left behind a legacy of astronomical contributions following his death in 1601, is the esteemed father of Danish astronomy. And many historians believe Brahe was the spark that inspired the king to order the construction of such an ambitious 35-metre-high structure.

Brahe studied civics at the University of Copenhagen. A popular field to follow at the time, it was not long before the gifted young man recognised his true passion for star reading and embarked on an extensive study tour of Europe to learn from other leading astronomers.

It was a trip that ended up leaving a lasting impression, not least because he lost part of his nose in a duel following what is believed to have been a quarrel over a scientific experiment. He was forced to fashion a distinctive silver prosthesis, which he wore for the rest of his life.

King of the castle of stars
Upon his return, Brahe expressed a tenacious willingness to pursue clashing ideas. After observing a supernova that covered the skies of Copenhagen in 1572, Brahe went on to build an international reputation by challenging the commonly perceived notion that everything outside the orbit of the Moon belonged to an unchanging fifth element. He wrote about his revolutionary discovery, proving that visual phenomenon occurred at a further away point in the universe than most experts concurred.

Brahe continued to discern other groundbreaking marvels about the universe from his haven on the small island of Ven. Brahe spent over 20 years there observing the heavens, constructing a castle and laboratory called Uraniborg, which included an underground facility on an adjacent site, which he christened Stjerneborg – meaning ‘Castle of the Stars’. When he was not tracking galaxies, Brahe socialised as a celebrated figure at the Royal Court in Copenhagen.

Laying the stones
Brahe was innovative, inventing precise astronomical equipment and a star-chart so accurate it was not surpassed until 1729. Despite the facilities made available to him, Brahe was not enamoured with the new monarch, Christian IV, and relocated to Prague to become the royal court astronomer in 1597.

Brahe lived out the rest of his days in the Czech capital, and following his death in 1601, Christian IV became captivated by the famous astronomer’s insights into the nature of the universe. He began dreaming of developing an astronomical learning centre in the capital and purchased land for the purpose in 1622.

The foundation stone was laid in 1637 for Christian IV’s most noteworthy project, the Round Tower, and he personally oversaw much of its construction. The tower bears a unique golden script emblazoned in Latin on its exterior that translates as: “Guide your learning and justice, O Lord, into the heart of his Majesty King Christian IV.”

Spiraling science
In homage to Brahe, the diameter of the Round Tower was exactly the same dimension as the observatory at Stjernesborg. Unlike most towers with spiral staircases, it has no steps. At four metres wide, the 200-metre stairway is big enough for a horse and cart to carry bulky astronomical equipment up to the observatory at the summit.

Many important scientists and heads of state, including Peter the Great of Russia – who rode to the tower’s summit on horseback – visited the tower.

Ole Romer, the Danish scientist who dabbled with the speed of light and invented the thermometer, became director of the Round Tower in 1681. He introduced telescopes and the pendulum clock to his pupils.

The great brass dome topping the structure melted in the great fire of 1728. The point at the end of the Spiral Walk (where visitors can today see 25 metres down to the bottom) is Denmark’s point zero, which astronomer Thomas Brugge used to remap the city in the 1760s. In 1902, a car was driven to the summit for the first time.

Today, the tower complex remains an integral part of the city’s scientific and cultural life, serving as a classical concert venue, exhibition hall and, of course, an observatory. It continues to be used by astronomers, all of whom would probably gladly give up their nose for the chance of emulating the greatest Danish stargazer of them all, Tycho Brahe.

– The Round Tower is 42 metres high

– Its equestrian staircase is 4 metres wide and 200 metres long, turning 7.5 times upon its ascent

– Its masonry consists of alternating yellow and red bricks, the colours of the Oldenburgs, the royal house of Denmark until 1863

– Primarily intended for horses and carriages, many bicycle races have been held on the staircase

– An annual race for unicyclists is held in the spring. The record time to go up and down is 108.7 seconds.

– Hans Christian Andersen was a fan, referencing the tower in several of his tales, including ‘The Tinder Box’ and ‘The Elder-Tree Mother’

– A 1:3 replica of the Round Tower stands in the Danish-founded city of Solvang in California