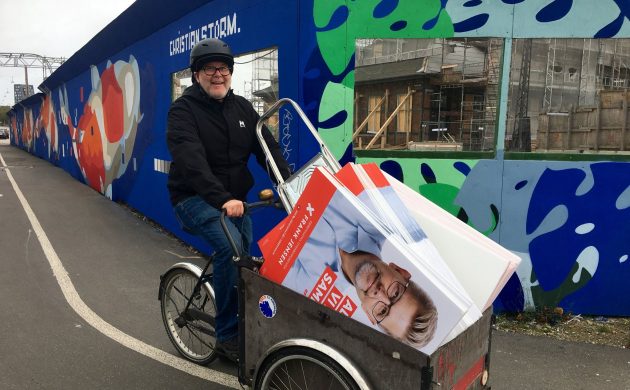 It was a good day for Frank Jensen (on the poster, not the bike) and Socialdemokratiet (photo: Frank Jensen)
November 22nd, 2017 11:58 am| by Christian W

With all the votes accounted for now (aside from a Florida-style recount in Frederiksberg), the 2017 local and regional elections in Denmark are all but concluded, and the result is clear.

It’s been a fantastic election for Socialdemokratiet, which saw its overall vote share climb by 2.9 percent (+69 mandates) compared to the last local elections in 2013, and retained Frank Jensen as the mayor of Copenhagen. The party also performed well regionally, assuming power in four out of the five regions. Only Region Syddanmark voted for Venstre.

Conversely, it was a miserable showing for Venstre and Dansk Folkeparti (DF). Venstre fell by 3.5 percent (-79 mandates) compared to 2013, while DF slipped 1.3 percent (-17 mandates).

Copenhagen casualty
In Copenhagen, the poor result for DF means that the party loses its deputy mayor mandate, which means Carl Christian Ebbesen will be forced to relinquish his position as deputy mayor for culture. The six deputy mayor positions will be filled by Venstre, Enhedslisten, Socialdemokratiet, Alternativet, Radikale and Socialistisk Folkeparti.

Enhedslisten’s Ninna Hedeager Olsen expects to take over as deputy mayor for technical and environmental issues, as party compatriot Morten Kabell decided not to stand for re-election.

SF’s Sisse Marie Welling believes she will become the deputy mayor for health and care, while Cecilia Lonning-Skovgaard (Venstre) and Nico Gründfeld (Alternativet) are also expected to be given deputy mayoral positions.

Hans up for Toft
In Frederiksberg, there was a bit of drama as a number of parties demanded a recount due to a close race that was only a couple of hundred votes apart.

However, incumbent mayor Jørgen Glenthøj (Konservative) has announced that he will continue on as mayor and thereby continue the 108-year tradition of having a Konservative mayor of Frederiksberg.

Elsewhere, Hans Toft (Konservative) will continue his reign as the longest serving mayor in Denmark as he gained another four years thanks to a strong performance in Gentofte, where he has ruled supreme since 1993.

Denmark’s former men’s and women’s handball coach Ulrik Wilbek will be the mayor of Viborg, despite his party (Venstre) earning fewer mandates compared to 2013.

READ MORE: Local elections 2017: Copenhagen for all under the banner of ‘Our city, together’

Fewer voters nationwide
Overall, fewer people turned out to vote this year compared to four years ago. Nationally, 70.8 percent of eligible voters turned out yesterday, which was down from a record 71.9 percent in 2013.

The slight fall came despite the voting booths being open from 08:00 this year – an hour earlier than four years ago.

Voting participation was high on the islands of Fanø, Læsø-Samsø and Ærø, which all enjoyed voting percentages of over 80 percent – as did Allerød in Greater Copenhagen, which had a percentage of 81.1 percent.

The capital region, on the other hand, saw some of the lowest voting turnouts. Rødovre, Glostrup, Brøndby, Copenhagen and Ishøj all saw voting percentages of under 65 percent – the worst being Ishøj with 59.6 percent.

The individual votes of prospective candidates are still being counted, so it is too early to finalise the list of councillors elected to serve their municipalities over the next four years.