How should refugees be treated? As Europe experiences the greatest mass movement of people since the Second World War, it’s a critical question that has challenged the infrastructures, moral values and concepts of identity in countries across Europe.

Denmark, a small welfare state with a progressive self-image, is no exception to this migrant quandary. However, as it cracks down on restrictive asylum policies and tightens its already tough asylum interview process, its answer becomes clear: deter arrivals.

According to Morten Goll, the co-founder and executive director of the innovative community centre Trampolinhuset (Trampoline House), this approach is all wrong. “The problem is not that they’re here but how we treat them,” he told CPH POST when we visited him at the centre.

In return, asylum-seekers help with the day-to-day tasks and development of Trampoline House by participating in activities like cooking, cleaning, childcare, language classes, and legal and medical counselling, creating a space for asylum-seekers to be a part of a community, educate themselves, and build relations within Danish society while they navigate the complex relocation process.

However, says Morten Goll, the objective of Trampoline House is not simply to be a stepping-stone for newcomers to Denmark. Rather, the house exists to repair democracy in Denmark.

A lively, inspirational introduction
Located in Copenhagen’s Nordvest district, amongst halal butchers and falafel restaurants, is the lively Trampoline House.

As I walked into the space, I was greeted by a barking dog and the loud giggles of a young Arabic boy. The boy was running around the charming living room-type space as a young woman, presumably a volunteer, followed him. I watched as he bolted across the room, past two young men battling it out in a seemingly intense game of table-tennis, snaking through the sofas where a group of middle-aged men were chatting over tea, and straight to a door at the far end of the room. As he threw his body against the door, the young woman trailing behind quickly yelled: “No! No!”

Through the glass window adjacent to the door, I saw the suited, bearded Morten Goll, who I was waiting to meet. Goll was seemingly unfazed by the boy’s antics as he kept his focus on the the two women sitting around a table with him. As he finished up his meeting, I stood at the sticker-covered wooden bar where the lounging men came up occasionally to refill their mugs with tea. Minutes later, I sat down with Goll himself to chat politics and his work.

Starting our interview later than planned, I jumped right into my questions, asking first for a simple introduction of himself and his work at Trampoline House. What I got instead was a 15-minute, utterly inspiring manifesto on the conflicting ethos he sees in Danish democracy and the Danish asylum and integration system — one that ultimately guided the mission of Trampoline House.

They seek asylum, we seek solutions
“Because democracy is such an integral part of the welfare state, it’s really dangerous when you see that democracy is failing,” Goll explained.

“When you start putting people in camps, when you start talking about certain groups as problems and not solutions, it’s a sign of sickness. The demagogues, mostly from the right wing, use these scapegoats in order to gain power; they do not trust the newcomers in Denmark and want to defend the welfare state and the nation’s mutual trust by destroying democracy. It’s an orchestrated effort in order to change the country and repair the mutual trust between us, but they are wrong in their solutions. It’s not about who’s welcome or not, it’s about making democracy work. That’s the solution we are trying to build here at Trampoline House.”

The story of Trampoline House began eight years ago during a workshop series entitled ‘Asylum Dialogue Tank’ (ADT). Organised by artists Morten Goll, Joachim Hamou, and Tone Olaf Nielsen, the workshops brought together 40 asylum centre residents, art students and asylum activists with the aim of identifying the main problems in the Danish asylum system and proposing ways to improve conditions for asylum-seekers in Denmark. During the workshops, Goll and his colleagues actively chose to resist the victimisation that the refugees and asylum-seekers were subject to at the camps.

“We framed them as the experts,” Goll explained. “The idea was to reverse the power play. We wanted to give them another framing in order to allow them to step into a different kind of character.”

Recognising a resource
This sentiment holds strong in Trampoline House today. Central to the house’s mission is the understanding that asylum-seekers are not helpless victims, but resourceful, competent individuals with lots to offer once given the opportunity to enter into an equal and democratic community. According to Trampoline House, both integration and democracy function better with transparent decision making, involving all the parties whose everyday lives the decisions concern.

Once a week, the staff, volunteers, interns and visitors of the house get together at house meetings, where an open agenda invites discussions about the house’s activities, political recommendations and future. Volunteers with and without asylum-seeking experiences also co-operate to organise refugee political discussions and talks by experts and professionals.

For many asylum-seekers, Trampoline House is their first encounter with a free, supportive and democratic community, and the house does not take this responsibility lightly. At Trampoline House, there’s a taught and practiced motto of ‘Learning democracy by doing democracy’.

“Once you start to feel what it means to be a part of a democracy, you become stronger, because knowledge is empowerment. What representational democracy really needs to not decay into the dictatorship of the majority is to be challenged by an extremely strong people,” Goll ventured.

“When the demagogues win, it’s because we have lost our connection with one another – the population has stopped effectively communicating. For democracy to work, the people need to be more than voters, they need to be political agents. And we can start in local communities and then gain the power to confront the politicians.”

“Normally, people get started on the job search once they hit the municipality with a CPR number, but at that point maybe they’ve spent one and a half years in the asylum system and they’ve been victimised, degraded, destroyed as human beings; they feel like they’re not part of anything, and they’ve lost all hope,” cautioned Goll.

“We want to prevent this loss of hope and skills by getting people into a development where they can rise to the occasion and hit the job market a lot sooner.”

As he continued, his face lit up, his excitement for his work palpable: “Some politicians have a fear that if we have too many refugees, society will break down because they think that is it the refugees that destroy society. I am saying that it is the misinterpretation of democracy that destroys society. This is our big social experiment.” 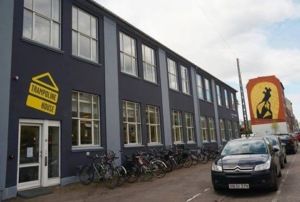