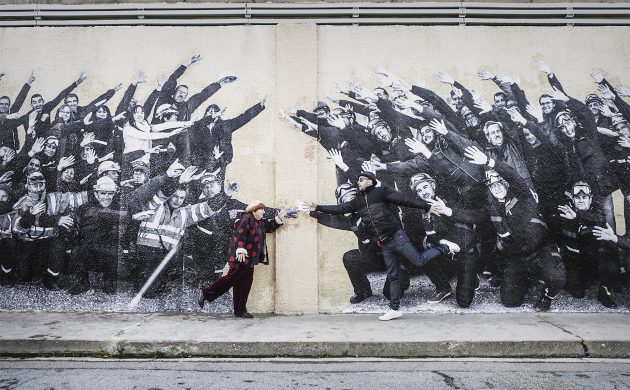 This documentary is a charming and often comedic depiction of a journey taken by two unlikely friends.

Agnes Vara, 89, one of the premier figures in the new wave art scene, and contemporary muralist JR, 33, embark on a road trip across their native France.

The pair travel in a van capable of taking and printing large format photographs. On their journey they pick individuals to capture and then display their images in public spaces.

In feedback sessions these pictures are used as tools to elucidate intimate visions of the participants’ past and present lives.

In between these events, Vara and JR display their wit and sense of fun as well as their compassion and humility – all of which serves to bridge the gap between their respective ages and work as artists.

The film is beautifully made  – effortlessly combining intricate social observations with plenty of laughs.

Director Håvard Bustnes chronicles the rise of the political far right in Greece through the perspectives of three women who, for a time, led the populist Golden Dawn party.

Bustnes filmed the women predominantly in their homes where they were happy to introduce him to things like their Disney film collections and favourite pets.

However, he intersects these scenes with footage of violence committed by their male counterparts, which clearly displays the discrepancy between party members’ personal and professional lives.

Nevertheless, Bustnes takes a heavy handed approach to story-telling due mostly to his consistent attempts to make the women confess sympathy for Nazism.

He often demands that they answer leading questions in lieu of developing a more nuanced narrative based on, for example, the background of their deeply-rooted prejudices.

The film consequently loses its way in parts, with even Bustnes admitting his direction has failed to unmask the real reasons for his subjects’ political persuasions.