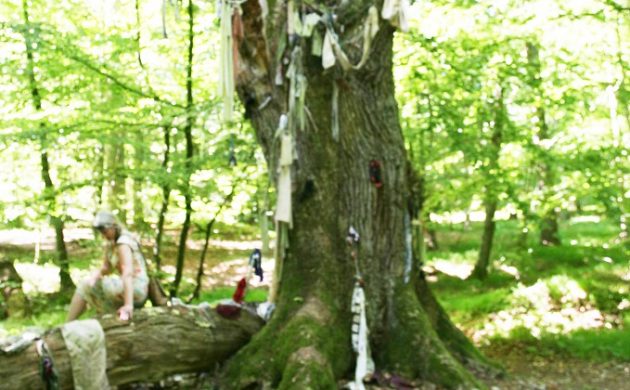 Did you hear about the British woman who had to be rescued by the fire brigade after she got stuck upside-down hanging out of a toilet window trying to retrieve a piece of shit that ended up on the window sill.

It gets worse. The amateur gymnast was on a Tinder date that was going so well she had made it back to her date’s accommodation, but then the flush on the toilet let her down. Panicking, she scooped out her floater and threw it out of the window. The rest is misery.

But fear not, as Denmark has a lass to rival this daft damsel in distress, and in her case she was stark naked when she got caught in a compromising position.

Local reports at the time of the incident in 1909 noted that she had “no apparent medical ailment” when she got herself wedged between twin trunks halfway up the sacred Rag Tree (Kludeegen) in Rønnede in southern Denmark.

With no local fire brigade on call, she had to wait the entire night until some passing farmhands freed her with the aid of some soap and elbow grease.

Dressed in rags
The tree in question is one of Denmark’s most famous and strangest looking.
Located in Leestrup Wood a few hundred metres away from the main road from Faxe to Præstø, the 75-foot oak is covered head to toe in rags.

The Rag Oak’s strangely decorated appearance is the result of a custom originating in pagan times that involved the sick hanging an article of their clothing from one of its branches in the hope they might be cured.

Until modern times, illness was considered by many as a form of demonic possession, and many believed the powerful natural forces of well-being existing in the tree could absorb any ailment or demon through contact with the patient’s clothing, thus driving it out.

Medicine has of course moved on, but even today some adhere to this vivid custom.

Opening to new world
So why was the young woman naked, we hear you ask. Was it because she had taken off all her clothes to hang on the tree? Close, but no, it was because she was taking part in a rebirth ceremony, for which most participants stripped down.

Up until the 20th century, the Rag Oak was a perforation tree, which means it had a secondary trunk growing from its main one, which rejoined it again to form an aperture: an oval hole some 60 cm wide.

Today the upper part of the trunk has withered away, leaving the perforation now open at the top, but for many years the aperture helped it perform its role as a sacred tree central to pagan healing and demon exorcising ceremonies.

The tree of life
Both children and grown-ups either crawled or were dragged through the hole, naked like babies through a symbolic birth-opening in the tree, to emerge supposedly reborn and healthy, cured of whatever might have ailed them.

It was believed that in order to be successful, this ritual had to be performed on three successive Thursday nights, and on each occasion repeated either three or nine times, while appropriate magic spells were chanted and sung.

To complete the cure, an item of the sick person’s clothing was then hung on a branch, and a piece of the Rag Oak’s bark cut off, to be placed under the subject’s pillow three nights in a row.

Raided and celebrated
The Rag Oak has not always been treated with deference by all. On occasion it has been plundered by travelling rag dealers who later offered the rags for sale.

In 1992, a zealous group of born-again Christian activists, apparently enraged by the pagan significance of the venerable oak, raided it and stripped it of its clothing. But only a few days later the tree was abundantly draped once again.

And ultimately the tree has had the last laugh, as how many travelling rag dealers can you name who have been immortalised in fiction (besides Steptoe and Son).

In an anecdote described in his book ‘Thoughts Within a Chimney’, the writer and commentator Martin A Hansen told of a bicycle trip to the Rag Oak (see right).

It is a fitting testament to a tree that continues to mesmerise all who see it. 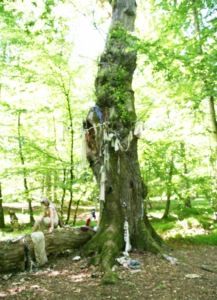 Extract from 'Thoughts Within a Chimney' by Martin A Hansen

The wood was chilly, and I felt strangely cool beneath my shirt. Certainly a rear wheel must be able to spin, but there are times when indeed it should not. How long had I sat there? My tobacco was no longer burning and the pipe was cold. And that damned wheel … how could it still turn? No breeze moved the air, not a leaf stirred.

Some short distance before me, in a glade, in a choir’s room, the oak was there, old and dark, and huge. I stood entranced, dazzled by the moment, uncertain with what confusion nature embraced me. Could I trust my eyes? Was it only a thin sunbeam that for an instant danced on bark, or was that truly a bare woodland nymphet hiding behind the trunk? Her body sweet and young, her head wizened?

The tree itself is no pretty sight. Its roots grasp the oil like a crocodile’s limbs, and the trunk is deformed by dark, hoary knots. Centuries ago an offshoot from the earth had developed into a huge branch, joining another limb further up to form the hole through which sick creatures once crawled, pathetic and naked daring not to even to expel a sigh, for silence was the rule. Thursday before daybreak they crawled through, nine times against the sun.

Once I had noticed the rags, however, it was as if the tree changed in manner, became lighter and more friendly, and l could almost feel its power, as the poor sick would have felt it. ln awe I ventured to steal a rag fallen to the ground, offering in return a good and almost new handkerchief which has no doubt since been stolen once again.

And I must tell you: this all happened several years ago, and from that day hence I have suffered from neither cold in the head nor sore throat as I had always done before; believe me.