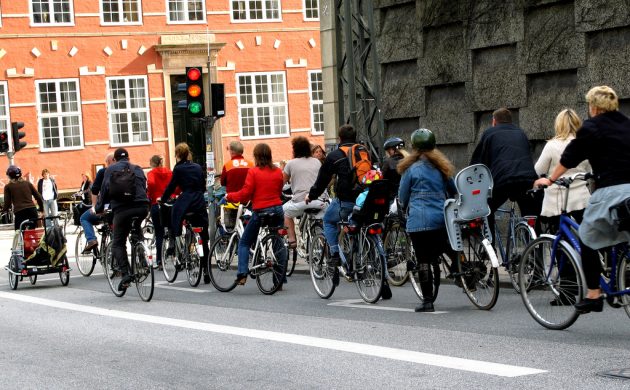 Time to green-light taking cycling in Denmark to the next level? (photo: Mikael Colville-Andersen)
January 14th, 2019 10:31 am| by Christian W

A new campaign launched by the Cyklistforbundet cyclists’ federation  has turned heads this week by proposing that people should receive a tax deduction for cycling to work.

The point is one of four on a campaign aimed at making it more attractive to hop on the old iron in Denmark. Other points include subsidising electric bicycles and reducing car speeds in urban areas (see video below).

READ MORE: Cycling like a Copenhagener can save lives, study shows

And with Parliament elections on the horizon, Cyklistforbundet head Klaus Bondam hopes the campaign will become an aspect of the election race that promises to concern climate issues more than ever before.

“I think we can convince the government that funds need to be set aside. Previously we’ve had the ‘Cycle Billion’, which aimed to improve infrastructure from 2009-2014,” Bondam told TV2 News.

“You could easily imagine that we change the transport deduction so people receive a deduction for using public transport and for cycling – instead of how it is today, which is a deduction if you live more than 12 km away from work.”

A fraction of car cost
One of the other points of the proposal is for municipalities to be granted a state-funded pool of 200 million kroner annually for projects that promote cycling. According to Bondam, that’s the equivalent of 2 kroner going to bicycles for every 100 kroner going to car infrastructure.

The campaign has attracted the blessing of one of the heavy hitters in business, the national confederation of industry, Dansk Industri (DI).

“Nationally, we could save 267,000 sick days annually if we got more people on the bicycle,” Michael Svane – the head of the Danish Transport Federation, which is one of DI’s eight trade organisations – told TV2 News.

“I support it as an individual and as a DI representative because we have conducted a survey for what cycling means for the mobility of the business sector, and it shows that traffic is reduced by 6 percent on the most congested roads (not including motorways) if we can get 10 percent more people cycling to work.”