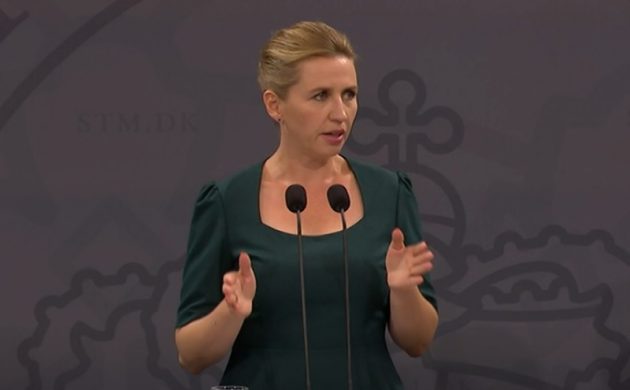 This could just be the first step, contended Mette Frederiksen (photo: screenshot)
August 15th, 2020 11:35 am| by Christian W

The government currently recommends the public to use face masks when travelling on public transport – particularly during peak times.

But from next weekend, that will change.

In a press conference moments ago, PM Mette Frederiksen announced that facemasks will be mandatory as of August 22.

More specifically, everyone over the age of 12 must wear a facemask or visor when travelling on buses, trains, the Metro, ferries, taxis and light rail.

Could be expanded
The justice minister, Nick Hækkerup, revealed that it will be up to the traffic companies to enforce facemask usage.

He also explained that the new initiative will come into effect next week to give the private sector enough time to obtain facemasks.

Frederiksen went on to underline that obligatory face masks could be extended at some point to include other areas of society – such as supermarkets.

Minority report
There has been ample debate in Denmark regarding the high frequency of cases within certain ethnic minority groups, such as in Aarhus.

The PM maintained that it is important for minority groups to comprehend that they are part of a bigger collective and act accordingly for the greater good.

Frederiksen underlined that many minorities work in vulnerable jobs, such as bus and taxi drivers, or in healthcare and supermarkets, and it is not acceptable to demonise an entire group because of the spike.