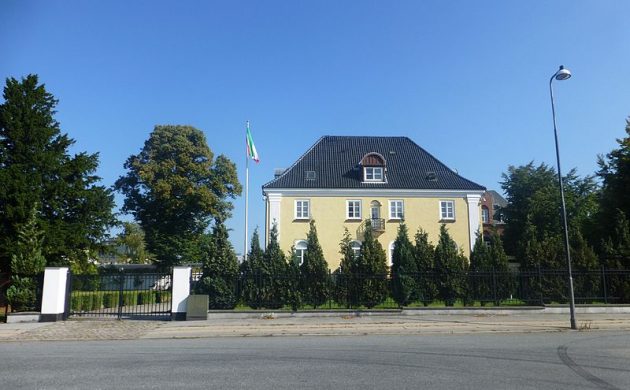 How much did they know at the Iranian Embassy in Copenhagen? (photo: Leif Jørgensen)
November 8th, 2018 11:18 am| by Christian W

Several parties in Denmark want to investigate whether the Iranian Embassy in Copenhagen had anything to do with the possible assassination plot against Iranian exiles that closed down much of the country in late September.

Should any personnel attached to the embassy have any connection to the so-called ‘death lists’, they should be expelled immediately, the politicians maintain.

“I think that some clear indications have surfaced regarding a specific death list from the Iranian Embassy concerning some people they want to remove from the surface of the earth. And we simply need to get to the bottom of that,” Michael Aastrup Jensen, the spokesperson for foreign affairs for Venstre, told Dr Nyheder.

“As I see it, the only response would be to toss them out of the country, because it is completely unacceptable.”

The plot thickens
Jyllands-Posten newspaper has allegedly come into possession of a pamphlet from the Iranian Embassy in which several Iranians living in exile have been stamped as terrorists.

Two former intelligence agency heads consider the pamphlet as some kind of  hit-list, as one of the names on the list was a former head of the opposition group ASMLA, who was killed in the Netherlands. Three names on the pamphlet are Iranians living in exile in Denmark.

Denmark has called home its ambassador to Iran as a result of the case and the Foreign Ministry summoned the Iranian ambassador to Denmark to explain the situation. Thus far, the embassy has denied any involvement in the plot.

The case also took another turn yesterday, when three members of ASMLA were arrested and charged with advocating terrorism – more specifically the armed attack at a military parade in the southwest of Iran that killed 25 people on September 22. They were later released.