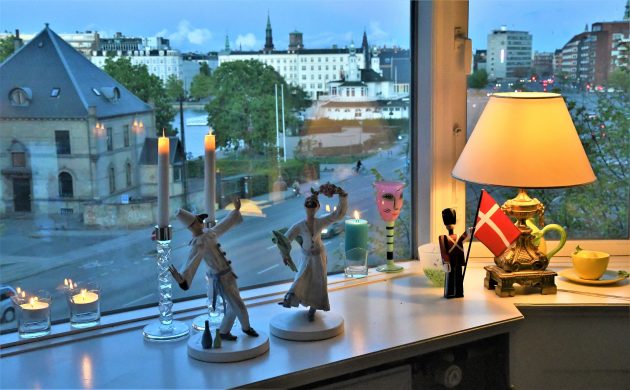 There aren’t many news photographs one can safely take during the Coronavirus Crisis, but this is one of them (photo: Hasse Ferrold)
May 5th, 2020 11:32 am| by Ben Hamilton

Today marks the 75th anniversary of the end of the German Occupation during World War II.

And it also marks the fifth anniversary of one of this newspaper’s most intriguing history stories.

It all started when the neighbour of a CPH POST staffer found an old copy of Politiken dated 4 May 1945 under his floorboards.

“Berlin er faldet” (Berlin has fallen) read the headline, but it was on page 3 where the juiciest details could be found.

It painted a picture of a country freed from its German captors, patiently waiting to be liberated by the advancing British forces.

But for some Danes it was a window of opportunity impossible to resist.

READ MORE: “Liberation is on the way – May the 4th be with you”

Revenge killing spree
As the newspaper reveals, revenge was bloody and swift in the two days leading up to liberation, as Danes perceived to be traitors were sought out by their countrymen and summarily executed.

It’s interesting to note that none of the stories are reported as retribution against Nazi collaborators, but it’s safe to assume that was the case.

Suspected Nazi collaborators, stikkere (informants), were rounded up, while many of the women, who were mostly accused of sleeping with Germans, were publicly humiliated. Some were even stripped naked and daubed with swastikas.

In total, 40,000 were rounded up, of which 13,500 were eventually punished for collaborating with the enemy.

Marked by a 19 metre-long candle
As is traditional, hundreds of thousands of Danes lit candles to display at their windows yesterday evening to mark the eve of Liberation Day.

Among these was a 19-metre-long candle placed in Blågårds Plads in the Copenhagen district of Nørrebro.

Mellemfolkeligt Samvirke, a NGO, commissioned the candle, and it was made from 3,000 recycled glass jam – each one containing a tea light.

The square is the same location where just over a year ago the lawyer and failed politician Rasmus Paludan provoked residents of the district by throwing the Koran into the air, leading to hours-long riots in the area.

A year apart, some might argue they are both celebrations of liberation, although the soldiers who came to Copenhagen in 1945 might argue they did not fight Nazism for those kinds of freedoms.

For Bornholm, it’s a bombing anniversary
However, not everyone in Denmark was able to celebrate Liberation Day in 1945 – or for that matter to mark the date today.

The people of Bornholm had to wait a full year for liberation, because their German occupiers were replaced by Russian forces who did not finally return home until March and April 1946.

While the likes of Copenhagen was celebrating in May 1945, most Bornholmers were being bombed. Their German captors were instructed to hang on to the island as long as possible, as it was crucial to the country’s efforts to evacuate troops from its falling territories.

“It was cruel. Every time we turned on a radio, all we heard were cheers,” recalled islander Inger Drewes, 91, in an interview with TV2.

Following several nights of furious bombing, the Germans eventually surrendered on May 8. A day later the Russians sailed into Rønne.

READ MORE: Bornholm marks 70th anniversary of Liberation Day, one year on from the rest of Denmark