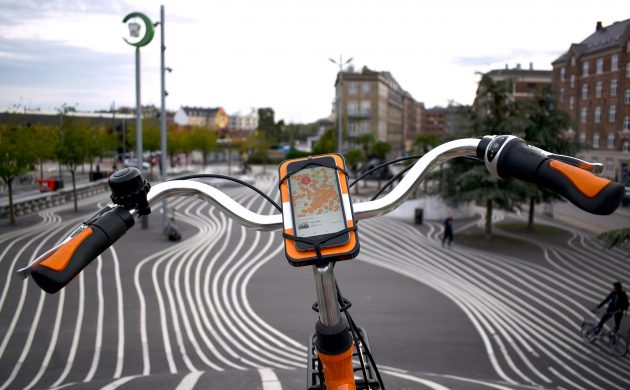 The number of routes was numerous, but there could only be one choice of bike (photo: Donkey Republic)
July 26th, 2020 5:00 am| by Ambika Venkatesh

It’s just as well that they postponed the Tour de France to the end of August – held amid the current coronavirus restrictions, nobody would have finished it!

For sprinters especially, the modus operandi is to spend the entire stage in a team-mate’s slipstream so you’re fresh to attack the final dash to the line.

But according to a study carried out by Eindhoven University of Technology in the Netherlands and KU Leuven in Belgium, travelling directly behind another cyclist significantly raises the risk of contracting coronavirus.

Remember, solar-panelled bike lanes and Eddy Merckx came from those respective countries, so they presumably know what they’re talking about!

20-metre fear
According to the study, a two-metre distance may be way off mark, as a coughing coronavirus carrier could potentially infect a fellow cyclist travelling within 20 metres, providing they are pretty much directly behind and going at a high speed.

The average cough emits 6.7 mg of saliva, which adds up to a lot of micro-droplets, which due to their lack of inertia tend to hang in the air.

At a moderate pace, for example running speed, the distance would be ten metres, and at a slow speed, walking for example, four to five metres. Travelling side-by-side, in fact, is less risky, the study concludes, than following directly behind someone.

The researchers simulated the release of saliva particles from persons in motion – methods that in ‘peace time’ are normally used to improve the performance level of elite athletes.

However, not everyone is convinced by the study’s findings.

Concerns not shared
“Our understanding is that the research is still limited; we still need to get some more robust research,” contended Alexander H Frederiksen, the chief of sales & partnerships at the bike sharing company Donkey Republic, to CPH POST.

“We have talked to quite a few doctors and microbiologists about the coronavirus and the risk of slipstreams, and what they seem to say is that when you’re outside and you’re moving, the wind or active air reduces the ability for contagion.”

Frederiksen concedes that there is a risk, but contends that cycling is still the healthiest transport option amid the continuing distancing restrictions – and that this has been reflected by the choices made by cities across the world.

“It’s nice to see cities across the world doing stuff,” he said.

“We’ve seen that many US cities have made temporary bike lanes, places like Bogota in Columbia have invested huge amounts of emergency money into biking, and even Budapest, and Barcelona. We’re just hoping this continues long after the immediate scare of corona.”

Capital’s cycling craze
Copenhagen, where an estimated 62 percent of its inhabitants regularly cycle, won’t be giving up its title of the most bike-friendly city in the world in a hurry, and a vast majority have turned to their bicycles since the easing of the lockdown began to avoid the much higher risk of travelling on public transport.

For Frederiksen, the movement to the saddle is a perfect fit for Donkey Republic’s agenda.

“Our agenda is to get as many people biking as possible. Our philosophy is that cycling really is the best form of transportation for cities. It doesn’t mean other transportation doesn’t have its own place as well, but for the majority it should be cycling.”

“In Copenhagen, the numbers had actually been shrinking for quite a few years – not a big drop, but there hadn’t really been an increase. And you could argue that you need to make cycling more innovative – to make a new version of it. That’s why our city bike sharing system is super flexible: you get the benefits of not having to repair your bike, not having to worry about your bike being stolen, and you get the flexibility all around the city.”

Republic for the people
It might surprise many people to learn that the majority of Donkey Republic’s users are locals, not tourists.

The split is about 70/30, and the company has accordingly switched its focus and introduced new products tailor-made for Copenhageners.

“For example, during the Coronavirus Crisis we introduced a new membership scheme that enabled users to have a bike for seven days at a time, so it felt almost like they were leasing it [as opposed to paying an hourly rate],” revealed Frederiksen.

“And it’s been great to see a lot of growth in this market; every day we have a lot of new members signing up for that.”

Poised to capitalise
With 18,000 bikes in 15 European countries, Donkey Republic is ideally placed to capitalise and, according to Frederiksen, future expansion is likely in “Latin America, North America, and even a bit in Asia and the Middle East as well.”

“What we’re betting on is that many cities will soon have cycling modalities like Copenhagen,” he revealed.

“We really want to accelerate that. We think we’re doing that very differently – and one of the things we care about is having a very user-friendly bike sharing app. We see that a lot of cities’ bike systems are focused on selling to the city, so they don’t really have the end-users in mind. And secondly, we’re trying to make it cheap.”

Tough of the track
Like most companies in the capital, Donkey Republic has been hit hard by the lack of tourism. After all, visitors tend to account for 30 percent of their users. Not only that, because most of them don’t subscribe, they tend to be more high-margin than the cannier locals.

“We kind of use the tourist revenue to subsidise the locals. So it’s of course hit the company quite hard. But we know we have a healthy underlying business structure. And we kind of just need to get through this,” reasoned Frederiksen.

But locally-sourced revenue is growing – and even more so during the Coronavirus Crisis.

“Of course, lots of people aren’t commuting as much. But we still see some positive trends. It’s been rough, but we’re going to make it through,” he added.