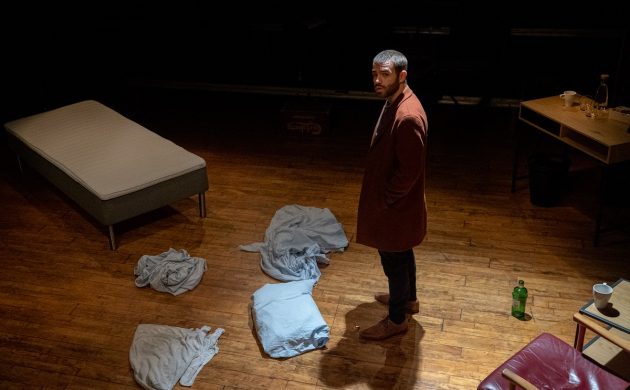 Where poorly-lit roads and buildings converge on shadowy figures sharing the same ‘cigarette, Christiania can be a little intimidating at night. In fact, it’s the last place you’d want to get stoned if you’re partial to a bit of paranoia in your spliff.

“Are you sure there’s a theatre in Christiania?” I ask again as I nearly drive into a lake. Even Google Maps doesn’t seem to know the way. I’m attending the opening night of the House of International Theatre’s latest production ‘Harry Clarke/The Shy Manifesto’, two 80-minute, extremely modern monologues playing on alternate nights until the end of the month at Bøssehuset. And I’m running late.

In my haste I unknowingly channel their central characters as I traipse through Pusher Street, greeting ‘to buy’ enquiries will surprising shyness, suppressing my urge to reply in my best Sarfeast London growl: “Not tonight darling, I’m going to the theatre.”

He’s a chameleon in New York
I don’t remember how Jody Fish entered the stage in David Cale’s 2017 play ‘Harry Clarke’ (first performed in 2017), but it is testament to his performance that days later I can’t really picture it without him. Monologues can be a lonely business, but he filled the space effortlessly, deliberately sharing almost constant eye contact with the audience as he took them into his world. It was hard to look away.

But who was this chameleon before us? It was like he was controlling the flow of blood to his face, whether it was as the pale-faced child enduring the shameful bullying of his father, or with the brooding intensity he brought to his alter-ego Harry Clarke and more than one seduction scene.

It’s jaw-dropping how the same actor can look both unremarkable and devilishly sexy with a flick of the head. Oh, and he can sing too.

Slow starter … the big reveal comes later
For Daniel Neil Ash in Michael Ross’s 2018 play The Shy Manifesto, in contrast, it was all about the entry, and the way he appeared, with the help of a phone hooked up to a monitor, will linger long in the memory. Unlike Fish, there were no forcible attempts to connect with the audience, and the overall result was a slow-burner that grew more pleasurable with maturity.

In those opening minutes, the weakest of the production, the props did him few favours, and the early dance scene was a flop. But ultimately this was more of a reveal than ‘Harry Clarke’, a flashback to its straight story, and the more the audience understood, the more they liked it.

Accents to fall in love with
While Ash had a weaker onstage presence and singing voice than Fish (Morrissey was a lot of fun though), he brought more life into the characters who punctuated his story – impressively so. As Callum the protagonist, he could be revealing a great tenderness and then whoosh … the horrific character of his mother’s friend Libby or Tyrone, the hitherto only gay in the village, would be brought into action seamlessly – and with no aftertaste of the previous occupant, not even a swallow. That’s quite a skill.

His inflection and accent were pitch-perfect, and I found myself really warming to these faceless individuals. In fact when Tyrone invited Callum to come and watch ‘RuPaul’s Drag Race’, I was sorely tempted. It sounded like it could be a lot of fun.

Fish’s other personas, in contrast, were a little one-noted. The love interest was as forgettable as the cliché that was his father, and only the female characters managed to elicit the same degree of joy as Mr Clarke, a truly brilliant creation by the playwright, it has to be said. His accent is Elstree, we are told … and it’s pretty accurate by Robert Downey Junior’s standards. That ‘Johnny Depp does Landan’ twang, after all, is part of the play’s fun.

Direction that brings it all to life
Inhabiting the same stage and making use of the same bed, the monologues’ respective directors Joseph Sherlock and Jeremy Thomas-Poulsen both deserve credit for helping their charges to deliver close to three hours of pulsating intensity. The action never lets up and the times whizzes by.

From a character nearly falling overboard in ‘Harry Clarke’ to a young man being pinned up against the wall in his own home in ‘The Shy Manifesto’, the directors manage to, with minimal props, bring to life the stories of their protagonists to the extent the audience is patting themselves on the back for having such a great imagination.

Their direction is above all brave. Sherlock, for example, recognises that Fish is a great mover and that’s there no limit to where he can take us. The way he uses a sheet to convey a sexual act … that could have gone so badly wrong. But they really pull it off (pun intended).

And while the dancing at the start of ‘The Shy Monologue’ doesn’t really work, everything in the second half really comes together. It’s like we needed a bit of time to adjust to the central character’s unique wavelength.

He’s not a normal schoolkid after all, and maybe that’s why one of the final scenes, an imagined flash-forward to him cleaning up shit on Bournemouth Beach, really resonates.

One, or the other, or both
Perhaps the biggest flaw of this production could be the idea that audiences will want to see both plays. I can confidently say that Brits will find ‘Harry Clarke’ particularly hilarious, and that shy people will absolutely love the latter.

So if you’re shy and British, this is your lucky … er … nights. For the rest of us, it’s a safe bet that either play will take you on an unforgettable journey and wake you up to the wonderful potential of modern drama.

PS Oh, and a quick note to Mr Clarke. You said you didn’t know why people read reviews, as all they do is tell you what’s the play’s about. Well … have fun working out what’s going on in these two, sunshine.

Harry Clarke
ends Oct 31; Bøssehuset, Mælkevejen 69D, Cph K; 165kr, concessions available, teaterbilleter.dk
A sexual thriller about an American man who decides to start his life over as his British alter-ego: Harry Clarke. But how long can he lead a life of an imposter?

The Shy Manifesto
ends Oct 31; Bøssehuset; 165kr, teaterbilleter.dk
Have you ever revealed a little more about yourself than you wanted after a drunken night out, because 17-year-old Callum certainly has. This is a tale of coming to terms with yourself, accepting yourself for whoever you happen to be: shy, gay, you name it.