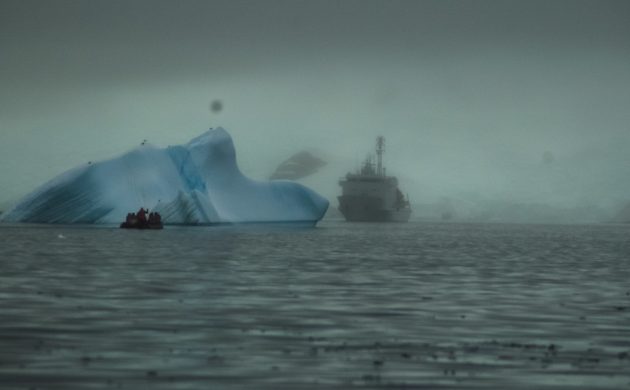 But one of them simply read “Lots of washing up” and, sure enough, in the bar after the performance most of the cast walked past with piles of it.

This was a play with more courses than Noma pre-2016, and pondering their significance is indeed food for thought.

Microwave, silver service, thermostat
Over the first third of the play, it is through the consumption of food that we grow to understand the mechanics of the team manning the Antarctic research station.

Ian Burns (Bertram) favours the microwave and he is as quick and sometimes as tasteless as the food it produces.

Lars (Benjamin Stender) is more measured. His Danish classic, when it arrives at the table, is meticulously planned – precision that matches the economy of his language.

While Angela (Sira Stampe), the skipper of the station, never serves the others. She takes but does not give. If she doesn’t like it, she swears forcefully – raising the heat like a thermostat.

Fergal’s fully-realised vision
All of this explains why so much work has gone into the set – and it is all by design.

Not only is the kitchen impressive – the standout appliance is the fridge, whose light adroitly signifies the passing of the scenes, which are as numerous as the meals – but the silhouetted sleeping chambers and oval-shaped window are equally sublime, and they are called upon in the closing scenes to render astonishing, unforgettable effects.

It’s remarkable to imagine all of this going on in the mind of one man, the playwright, and for it to be so faithfully realised by what was a collective effort by cast and crew.

Claus’s compelling centrepiece
So if the set is the menu, and the three aforementioned actors are the hors d’oeuvres, let us savour the impact of the main: the wonderfully named Fiskler (Michael Worthman), the commander of the base and husband of Angela, who returns to relieve her of control.

His entrance – following a beautifully orchestrated build-up by director Claus Bue, who swaps his favoured classical melodies for the thrash metal chosen by a headphoned Lars – raises the tension by more than a ratchet.

His presence is exactly the protein we have been crying out for, and it is as a four-piece that this band, sorry play, really thrives.

Dishevelled yet authoritarian, vulnerable yet soothing, and dynamic yet self-destructive, it’s an intriguing collision of contradictions that Worthman convincingly, and compellingly, portrays.

Ox’s stomach on this Burns night
Worthman’s advantage, of course, might be a lack of familiarity. For Stampe and Stender, these are their umpteenth outings with That Theatre, and we are used to seeing them in showier roles that demand more of their natural charisma.

Burns, on the other hand, who has been underused in bit parts of late, has a field day in what is a great showcase for all his talents. Singing, larkery, physicality, milky-eyed dolefulness … and it even permits him to demonstrate he has the constitution of an ox.

He cheerfully eats some of the vilest bacon ever cooked on a stage and then, barely 20 minutes later, devours Lars’s insipid, stinky pork dish.

Whatever happened to the artistic director taking all the plum roles?

ongoing, ends Nov 21, Mon-Fri 19:30, Sat 17:00, Tue & Thu 13:00; Krudttønden, Cph Ø; 165kr, teaterbilleter.dk
In this new play by Fergal O’Byrne, That Theatre Company takes us to a remote Antarctic research station, where a group of researchers find themselves in a near-death situation. How many moral absolutes are there when survival is at stake?