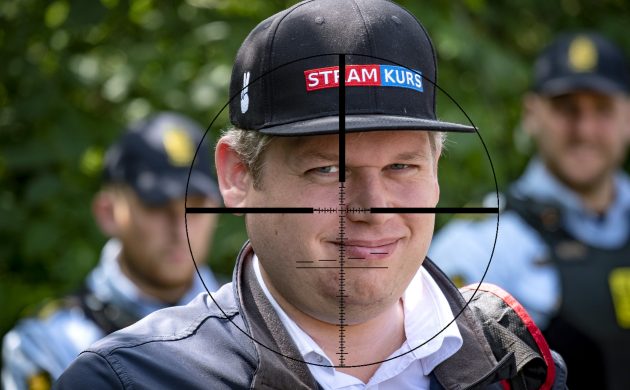 At a Constitution Day demonstration in Digterparken in the suburb of Åbyhøj, the police shot the 53-year-old on the leg when he tried to rush through a barricade to the demo wielding a knife.

It is contended the 41-year-old was complicit in the attack. He is accused of showing the other man a video of the Stram Kurs leader in which he provokes Muslims and of supplying him with the knife.

Additionally, the pair are charged with complicity in the June 5 episode. Both are pleading not guilty. While the 41-year-old has been held in custody since the incident, the 53-year-old has been in a psychiatric ward.

READ ALSO: Paludan held by police as Stram Kurs get kicked out of Belgium

In shock for minutes
Paludan himself will appear in court to give testimony, as the experience was “super uncomfortable” and had “consequences for me on a personal level”, he told DR.

The incident, during which he clearly remembers seeing the knife, has played on his mind a lot since – not least because he had to pack it in for the day.

“The minute after, I said I would return to the demonstration and continue. But there was a PET guard who just said we should take it easy,” he said.

“Subsequently, I became very upset and it was a very shocking incident. I think I was in shock in the minutes after.”

On December 15, a trial started in Horsens Court in which four men and a woman stand accused of buying and receiving 83 firearms acquired via the dark web. The arrests were made in co-operation with US and Swedish intelligence agencies.

And on December 21, the Supreme Court began proceedings to hear the case of the young man who coughed at two police officers in Aarhus and told them he had COVID-19. The man was found not guilty at the city court, but then guilty at the high court.