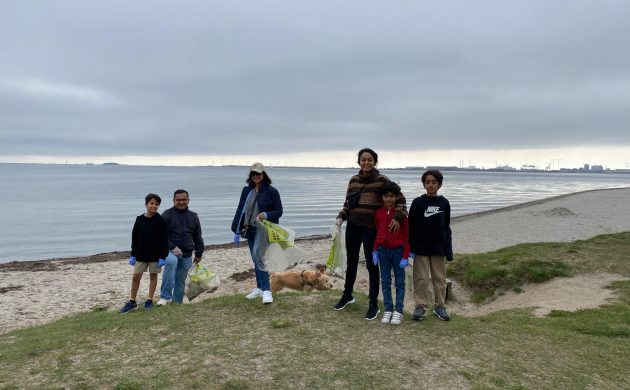 Large numbers of both children and adults are expected to participate in the clean-up (photo: Copenhagen International School)
March 29th, 2021 1:10 pm| by Ben Hamilton

An estimated 137,000 school children are expected to head out into Danish nature to pick up rubbish during Week 15.

The week of trash collecting, which is co-ordinated by Danmarks Naturfredningsforening, then climaxes over the weekend of April 17-18 when the adults join in.

Hundreds of children and parents at international schools in the capital, including Copenhagen International School, are expected to take part.

Fantastic to see so many
“It is fantastic that so many children have signed up for the Waste Collection this year, and we are positively surprised by the massive support from schools and institutions – especially after several months of closure and distance learning,” enthused Danmarks Naturfredningsforening president Maria Reumert Gjerding.

“The fact that teachers and educators prioritise putting waste on the timetable testifies that waste collection is a good way to combine learning and social well-being. At the Waste Collection, the children learn in a concrete way that we must take good care of nature and the environment, while at the same time giving them a good nature experience together with their peers.”

READ MORE: Inspired by their teachers and environment, thinking sustainably is their norm

It should not be confused with World Cleanup Day, which will take place in Denmark and worldwide on September 18. Denmark’s participation will again be co-ordinated by Plastic Change.

Easter sold out for summerhouse bookings
If you thought you were going to make a last-minute booking and land a summerhouse to celebrate Easter, then think again, warns Dancenter, one of the biggest holiday home booking agents in the country. “We are fully booked; all our homes are rented out. We were in Week 7 too, and we are again for Easter week. It is quite abnormal,” Kim Holmsted, the CEO of Dancenter, told TV2. The normal occupancy rate for Easter, he added, is 60 percent. According to Carlos Villaro Lassen, the CEO of Feriehusudlejernes Brancheforening, which is also sold out for Easter, Danish people accounted for 9 million overnight stays in 2020, compared to 5 million in 2019. Both companies warn they are nearly sold out for July too. However, August bookings are well below the norm, as it is not clear whether German tourists will be able to holiday in Denmark this summer.

Diplomats up in arms over appointment of former MP
A sizeable number of Danish diplomats and other employees of the Foreign Ministry have signed a letter of protest at the appointment of Kristian Jensen as a special envoy for Denmark. Jensen’s appointment, which will see the former foreign minister charged with getting Denmark a seat on the UN Security Council from 2025-26, marks the first time that a Danish politician has assumed a position in the Foreign Service. Usually, positions within the Foreign Ministry are filled by officials, but the government recently changed the rules to allow politicians to be hired by the Foreign Service. In total, reports Jyllands-Posten, 643 people who work for the Foreign Service have signed the protest letter.

Søndergaard’s list: The banker who helped eastern Europeans get mortgages
Erling Søndergaard isn’t quite Oskar Schindler, but he has an awful lot of eastern Europeans in eternal gratitude to him. The retired bank chief executive played a major role in granting 25 mortgages to families who have settled in the town of Borris in Ringkøbing-Skjern Municipality in west Jutland since 2010. For Borris – where the 25 families account for a fair proportion of its 850-strong population, which has become increasingly elderly over the years – it has brought many benefits. Firstly, the attendance at the local school has risen from 90 to 120, enabling it to offer far more activities, such as sports. And secondly, the families have mostly moved into homes that might have remained derelict and in a state of disrepair.

Bornholm liberation anniversary not forgotten by DR
It’s easy to forget that World War II did not end for Bornholm until 5 April 1946, the day that Soviet troops, who a year earlier had occupied the island after liberating it from Nazi Germany by heavily bombing it, finally departed. But DR will be doing its best to mark the 75th anniversary with a series of programs, including a live broadcast from the island’s capital Rønne on April 5, as well as a brand new drama-documentary miniseries about the WW II years, which premieres on May 16.