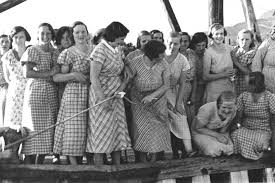 Smiles for a group photo hide the sadness most of these girls felt (photo: forsorgshistorien.dk)
April 18th, 2021 5:56 am| by Lauren Beauchamp

The Great Belt Bridge links Funen and Zealand together, but a small island in between, barely a square kilometre in size, does not have such a harmonious history.

Retold in exhibition
Today, Sprogø is mostly decked out with vacation homes, conference rooms and offices, but rewind six decades and visiting it was far less of a pleasant experience.

Between 1923 and 1961, the Sprogø-based Kellersk Institute housed 500 ‘sexually loose’ and ‘mentally ill’ women whose only hope of leaving was agreeing to be sterilised.

Their story is a dark chapter in Danish history, and for decades it remained hidden. However, a new exhibition at Dansk Forsorgshistorisk Museum in Slagelse has been shedding light on its macabre past.

The exhibition is the result of the hard work of the museum and Danmarks Forsorgsmuseum in Svendborg, although the true hero in this story is the author Birgit Kirkebæk, a doctor in special pedagogy.

Her 2004 book, ’Letfærdig og Løsagtig,’ which roughly translates as ‘loose and easy’, has been a huge influence on the research of the museums.

“The history of the women’s institution is a very black spot in Danish history: a piece of women’s history that must never be repeated,” explained Forsorgshistorisk chair Henning Jahn to CPH POST.

Eugenics in vogue
The story of the Kellersk Institute began in 1923 in a Europe still reeling from World War One and the Russian Revolution, convinced that the very fabric of civilisation was under attack.

Unemployment figures had swelled, as had the instances of sexually transmitted disease: ‘loose’ sexual morals were blamed for a myriad of social problems, and there was a focus on sexually active women as the spreaders of disease. The practice of eugenics, which proposed the selection of the fittest and the gradual decline of the genetically weak, came into vogue.

It was perceived that there were many women who “had very low sexual morality”, explained Jahn. “It was believed Denmark would be flooded by defective people, so you had to intervene through sterilisation.”

A large reason behind the establishment of the Sprogø colony was to reduce the unhealthy production of children who might have ‘degenerate genes’. The island’s ‘architect’, Christian Keller, was a senior consultant at the Kellersk Institute for the Mentally Deficient who had previously founded the Lirø Establishment for Inappropriate Men in 1911. Economic reasons were cited for the bid to halt such births – these ‘unwanted’ children would otherwise be nothing but a burden on society.

Women were not the only victims of these societal diagnoses. Between 1911 and 1961, roughly 700 ‘inappropriate’, mostly mentally handicapped men were banished to another island, although they were treated more like regular inmates.

Victims of circumstance
Kirkebæk’s book is based on the doctors’ notes, letters and school reports of 18 Sprogø women, together with newspaper articles, doctor treatments and amendments to the laws of the time.

Terms like ‘erotomania’ and ‘hypersexuality’ were often used to send a woman to Sprogø, who were also given an IQ test. Those who scored below 70 were deemed mentally deficient, but although this was supposedly the deciding criteria, according to Kirkebæk, in reality the establishment was more for isolating the ‘morally weak’.

She writes that most went to an ordinary state school, and even if few of them received exemplary grades, most could at least read and write. “Very few were what we see today as retarded,” she wrote.

The women often came from large, dysfunctional homes where alcoholism and violence flourished. Social problems in a family were often taken as an expression of hereditary defects and used as an argument to intervene. Many of the women were incest survivors – something actually used to strengthen the diagnosis; as a child she had already seduced her relative!

Because of the reputation of the island and its ‘easy women’, it exuded a fascination for the outside world, and it was not uncommon for fishermen to pick up women from the island to have sex with them, often resulting in pregnancies.

A life sentence
Though many of the original buildings of the part prison, part work camp and part psychiatric hospital are still standing, there’s not many traces left of the old institution. The gymnastics hall is now a conference room, the girls’ rooms are offices, and holiday apartments have been built where the old annexes were.

A small room on the first floor, just two metres by two metres, stands empty: despite the repainting job, the large scratch and fist marks are clearly visible on the inside of the door.

It was used as a cell in the women’s home, where they were locked up for bad behaviour and could be subdued with belts, straitjackets or an injection – a rare occurrence, but one deemed sometimes necessary.

Sprogø was run as a farm, and though the women worked without pay, their families received money during their stay. Despite humane intentions to offer women treatment rather than punishment, admittance was indefinite and it was Keller himself who decided when a woman could leave.

Two laws in particular affected the women: the Sterilisation Law of 1934, which pretty much made sterilisation a condition of being able to go home, and an amendment to the Marriage Law in 1938, which meant that men and women judged to be mentally deficient were not allowed to marry.

Altogether 500 women were admitted to the Sprogø Institute – usually between 40 and 50 at a time. They were there for various reasons – sometimes they’d run away from home or care, got into trouble with the law, fallen pregnant or simply could not take care of themselves. They remained on the island, on average, for seven years, though one woman languished there for 38 years.

Unfitting memorial
Throughout the 1950s, the numbers dwindled until the last Sprogø girl left the island in 1961.

Even before the institute was closed down, it was being considered as a home for young criminals, and Birgit Kirkebæk suggests that the thought of deporting and isolating certain aspects of society remains. “Who is most dangerous now?” she asked. “The idea shows up again and again.”

Jahn argues that the victims of the institute deserve some kind of memorial and small exhibition on the island. However, the island’s owner, Sund og Bælt, recently told TV2 that they did not want to open up Sprogø to the public.

Shockingly perhaps, the only testament to the crimes carried out on the island prior to the opening of the museum is a statue of Keller himself!