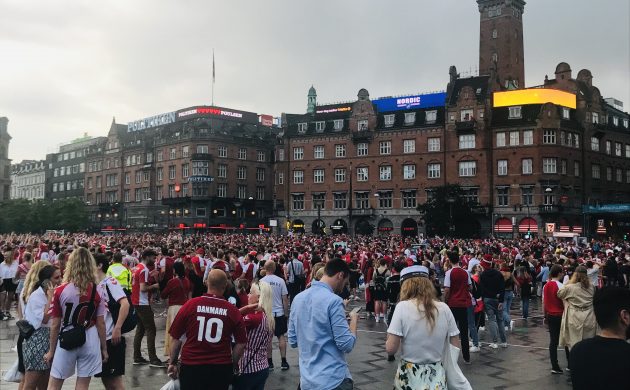 When the authorities elected to lift many restrictions on the eve of the Euro 2020 football tournament, they knew they were taking a calculated risk.

Football brings people together, and Denmark’s prolonged journey in the tournament, including a run of three spanking wins to take them to the semi-finals, really succeeded in uniting the country (in their hatred of England).

We spit as we chant, we jump up and down, we accidentally drink each other’s beers, and we hug each other to celebrate and console. It’s not exactly behaviour mirrored in the country’s supermarkets.

Highest infection rate since early June
So it’s no surprise, despite the rapid rate of the vaccination program, to see that the infection rate has been climbing in recent weeks. Just yesterday, it stood at 848 – the highest since June 6.

Not only that, but the proportion of positive tests, at 1.1 percent, is the highest since January.

So should the alarm bells be ringing? Surely most of the infections are related to the tightly-packed venues in which we watched the games. Organisers could ensure number limits, but they’re thrown out of the window when the ball hits the back of the net!

Living in a football bubble
“In recent weeks, we have been living in a football party in which many  gathered at big screen events, where people stood close, shouted, sang and threw beer into the air, which may have contained viruses,” Professors Hans Jørn Kolmos from SDU told DR.

“Now we just have to follow up on it and make sure it doesn’t develop. It is a matter of getting all those who could be at risk of being infected tested, and of finding chains of infection and putting people in isolation. And then we have to take a deep breath and see how things develop.”

Professor Eskild Petersen from Aarhus University concurs there is nothing too much to worry about.

“I do not think that you should be particularly worried about it immediately, because it is a consequence of us opening up while we have the new, more contagious Delta variant,” he said.

Hospitals still quiet
Furthermore, only 37 people are hospitalised with corona, and most of them are long-term patients. With most of the elderly vaccinated, the possibility of the hospitals being overrun by young people seems unlikely.

“But they will have these late effects that can make them incompetent for the next three to six months.”

If it continues …
One person who is concerned is Statens Serum Institut head Henrik Ullum, who points out there has been a four-fold increase in the infection rate since the end of June.

“It is a worrying increase, especially if one imagines that it will continue,” he asserted to DR.