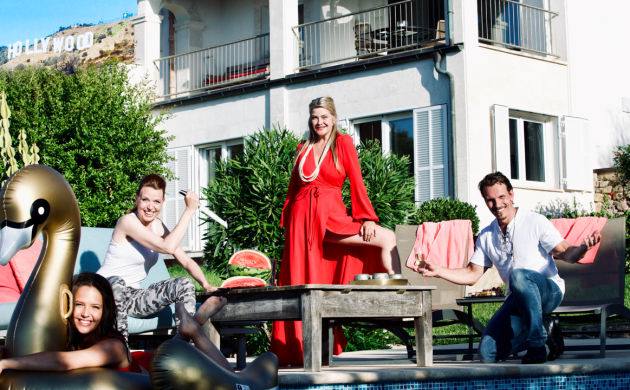 Neil LaBute’s ‘The Money Shot’, which is playing for two more days/three more performances at Folketeatret, recalls the brilliant first series of the David Duchovny show ‘Californification’ in which a new arrival in Los Angeles lights fireworks everywhere he goes. Only this time, the interloper in the ‘Valley of the Demigods’ is the playwright himself.

Opening shot: what you really need to know
LaBute’s script is a quick read-through of everything we tend to dislike about Tinseltown and its seriously vacant occupants: Belgium is not part of Europe, apparently; gunshot victims suffer exploding boobs for extra effect; and sob stories are manufactured out of missing column inches. The humour is satirical and occasionally reference-heavy, but mostly broad and accessible to all.

And let us assure you: this is money well shat (the jokes in the play are far cruder). The running time, with one interval, is well over two hours long: just like a movie in fact. In fact, first staged in 2014, it’s surprising nobody has snapped up the rights. So, as you take your seats, you’ll feel like this is a proper ‘night at the theatre’ experience.

The location is a 250-seater theatre with comfortable seating – a mark of how high the production group HIT Copenhagen is setting its stall for its Cph Queer Theatre Festival, an event many years in the making that is bringing culture with a capital C to the 11-day LGBTI+ event Copenhagen 2021.

True, it was a bit sticky in the theatre on opening night on Friday, but we were supposed to be in LA!

Action: Most effective when in your face
The Money Shot’s strongest card is its physicality: both its depiction and enactment.

Two standout physical endeavours bring the house down at the end of each act. Without wanting to give too much away, Shakira is brilliantly blended with Arthur Miller for hilarious effect, and two of the characters fight … in a highly sanitised Hollywood fashion in the absence of stunt doubles.

While its discussion of the very act itself, ‘The Money Shot’, has a novelty the rest of the script is mostly lacking. It’s the element of the play we’re secretly hoping won’t hold back, and it doesn’t.

I would have liked to see more physical interaction within the cast: for example, when it’s observed that one of the lesbian characters kisses like a man. It was an authentic human moment among the soundbites and slights that was worth more exploration.

But this is no ‘Act of Carnage’, a pressure cooker that slowly reaches boiling point, as the characters are pretty much at each others’ throats from the opening moments.

Close-ups: Incredulity in the wrong places?
Four strong performances hold up the play. Steve (Tomm Voss), a 50-year-old action star, and his young wife Missy (Mikka Deleuran), are the guests of star actress Karen (Dina Rosenmeier) and her partner Bev (Dorte Rømer) at their Hollywood Valleys home to discuss the possibility of Steve and Karen having sex on camera to boost their sagging careers?

Voss channels the brooding intensity of Tom Cruise, but perhaps without the winning smile. There are suggestions the Cruister’s turn in ‘Jack Reacher’ was on the playwright’s mind when he wrote it, and Voss did a good job at fulfilling this narrative.

Rosenmeier was well cast as the face of a thousand good causes. Again, like Steve and Missy, her character is a moron, and she did a good job of conveying somebody permanently dazzled by the Hollywood lights. She’s even ready for close-ups when she’s making dinner.

Deleuran brought the energy of a cheerleader to her role. The play functioned best when she was on the move: from the selfies in the opening moments to her stealthily filling up her handbag with pastries. Her character’s inclusion in the play brings an extra dimension that ensures it’s never rendered pedestrian.

Finally, Dorte Rømer as Karen’s girlfriend, the only one of the four to have ever read a book, is the audience’s representative on stage, and this places her under a great deal of scrutiny. Everytime Steve says something hideous, Karen self-centred or Missy vacuous, we’re looking at Bev for confirmation this will be greeted with incredulity, and I’m not sure Rømer’s grimaces nailed this part of the job description. After all, she lives in Hollywood, right?

She wasn’t helped by her wardrobe: which initially suggested she was a high-powered businesswoman single-handedly leading the fight for greater gender equality in boardrooms. T-shirt and sweatpants might have suggested she didn’t care that Steve used to be in a one-man, 100 million dollar opening weekend franchise, helping us to zero in on her contrasting intelligence, and obvious resentment, from the off.

Final shot: a teaser for the week ahead
Overall, the play felt rather low-energy as a quartet, but really came to life as a three-piece. A character checking on the dinner, or taking an important call, or even doing something else onstage (like the aforementioned selfies) gave proceedings an added verve.

Director Jeremy M Thomas’s trademark is bringing an extra twist, like swapping the male and female roles, or introducing a narrative outside the staging, so this is more or less his ‘straightest’ telling – perhaps ironic, given that this is the Cph Queer Theatre Festival.

But with the incredible line-up awaiting audiences over the next week, his crowning achievement is the organisation of the festival.

Together with Dina Rosenmeier, he has been working tirelessly towards the goal of making the theatrical element of Copenhagen 2021 unforgettable. And the opening night of ‘The Money Shot’ suggests he is very much on the money and well placed for this shot of glory.