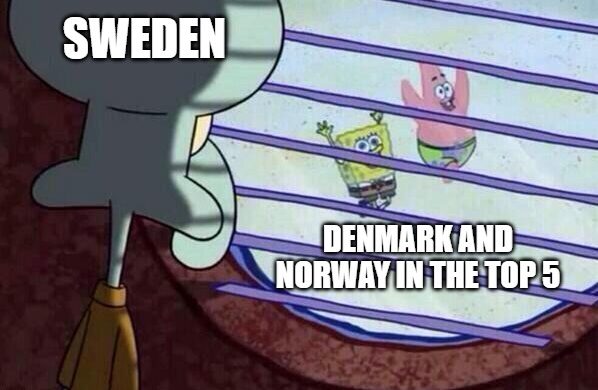 All but one of the top ten English-speaking countries are in the EU (photo: Lena Hunter / imgflip.com)
November 17th, 2021 2:48 pm| by Lena Hunter

A global survey of the world’s English-language skills, the English Proficiency Index, has ranked Danes as the third most proficient non-native English-speakers.

Based on the data of over 1 million standardised EFSET tests conducted in 112 non-English speaking countries, the ranking is conducted annually by the education organisation EF Education First,

This year Denmark has been pipped to the post by the Netherlands in first place and Austria in second.

But the Danes can at least claim victory amongst their Scandinavian peers, with Norway coming in fifth overall and Sweden eighth.

How’s your Danglish?
According to Professor Dorte Lønsmann of the Linguistics Department at the University of Copenhagen, the Danes’ English skills give them an advantage when it comes to being a part of international communities.

However, not all Danes wear ‘Danglish’ well.

“In broad strokes, the older people are the worst. And people in contact with English-speaking communities through work or studies are the best,” said Lønsmann.

She adds that Danes are generally best at speaking English in informal contexts – ordinary conversation away from work or study. Formal situations are where many Danes fall short.

She highlighted a survey from 2013 that showed only around 50 percent of Danes think that their English is good enough to read and understand English news.

Which other countries rank highly?