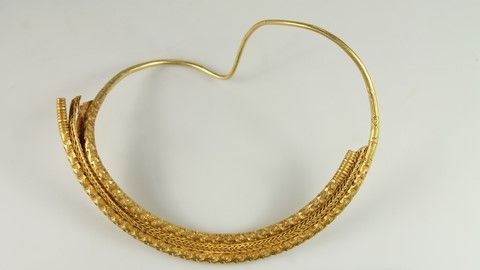 There was a bit of news for archaeology buffs this week as it emerged that an ancient golden neck ring was discovered in a field not far from Esbjerg.

It is believed that the ring was deliberately buried and hidden away, and thus not an item that was sacrificed to the gods.

“When sacrificing items at that time, it usually took place in wetlands and bogs and the like. We know a large wetland existed near the discovery site, so if it was sacrificed to the gods, it would have been located out there instead,” said Claus Feveile, curator at Museet Ribes Vikinger.

Day trip to Ribe?
Feveile doesn’t think it was moved either as the golden neck ring is in such good condition and has maintained its shape.

The ring is 21 cm in diameter at its broadest point and decorated with half-moon depressions ‘stamped’ into the gold (see image below).

That kind of decoration is only known from 9-10 other neck rings found in Denmark.

Initially, the neck ring will be exhibited at Museet Ribes Vikinger up until December 23.