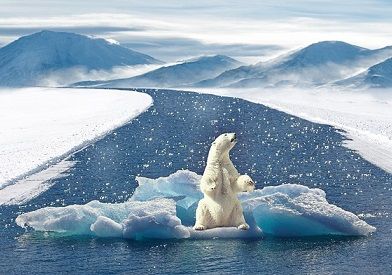 Ice is melting fast in Greenland; some animals are adapting, but the danger remains (photo: Myriams-Photos/pixabay)
June 20th, 2022 4:22 pm| by Jared Paolino

A new study led by DTU Space has shown that the melting of small glaciers in northern Greenland has increased by 55 percent over the past two decades. These small glaciers make up only 4 percent of Greenland’s ice-covered areas but are responsible for as much as 11 percent of total ice loss in the country.

“We can see there is a marked increase in the melting of the glaciers in northern Greenland. This shows there is great instability in the ice masses that cover Greenland, and that there is a considerable contribution to global sea level rises from here,” said Shfaqat Abbas Khan, the study’s lead author.

Smaller glaciers melting faster than ice sheet
The glaciers examined in the study are not directly connected to the famous Greenland ice sheet, which receives the bulk of scientists’ attention. However, according to Khan, it is important to study them because they respond differently to warming temperatures.

“The large loss of ice from these smaller glaciers is due to the fact they are more sensitive to ongoing temperature changes and therefore melt faster than we see in many other places in the Arctic,” said Khan.

Social media can be good and bad for mothers
Many mothers turn to social media to seek advice regarding parenting and their child’s development, claims a new study from the University of Copenhagen. According to the study’s findings, this social media use can both create a feeling of community and adversely affect mothers’ confidence in their parenting ability. Ida Egmose Pedersen, the lead researcher behind the study, has expressed hope the results “can increase professionals’ knowledge of how to talk to mothers about their digital use and well-being”.

Opening a window to the past: exploring the lives of 19th century Danes
Researchers from the University of Copenhagen, the National Archives and the Copenhagen City Archives have assembled Denmark’s largest ever historic population record. The data – now available to the public – was compiled from censuses, church registers and funeral records dating back to 1787. In addition to helping Danish history buffs explore their family heritage, the researchers behind the project hope that data will provide insights into how health, prosperity and causes of death evolved throughout the 19th century, including for specific population subgroups and professions.

Plant cheese of the future
Researchers at the University of Copenhagen have developed a tasteless cheese-like gel out of pea proteins. They now hope to identify the perfect fermentation process to give it that real cheese taste, which they say can’t be matched by other non-dairy substitutes, such as those developed from coconut oil or nuts. “If we want to create a change to a more sustainable cheese production with the help of plants, we must give the consumer something that tastes at least as good as cheese made from dairy products,” said Carmen Masiá, one of the researchers.

New sustainability centre inaugurated at DTU
A new research centre has been established at DTU with the aim of achieving ‘absolute sustainability’ in technology, product development and human behaviour. The centre, named the DTU Centre for Absolute Sustainability, will specifically focus on the development of new methodologies and measurement techniques to evaluate different paths toward sustainability.  In addition to housing experts at DTU, “a very important task for the centre will be to reach out to the surrounding community through collaboration with companies,” said Michael Zwicky Hauschild, the head of the centre.

Denmark and Canada’s 3,962 km border settled with help of DTU team
Experts at DTU have helped settle the historic border dispute between Canada and Denmark, providing their technological know-how to determine the precise co-ordinates of the border, as well aiding in the application and interpretation of the UN Convention on the Law of the Sea.  “It is an achievement we can be proud of,” said Niels Andersen, who was DTU’s representative at the signing ceremony between the countries last Tuesday.

Danish researchers become first to use quantum computers for power grid management
DTU researchers have become the first in the world to use a quantum computer to analyse an electricity grid. Encouraged by the efficacy of their novel approach – the team solved the so-called load flow problem – they have turned their attention to investigating how quantum computers can provide real-time knowledge of an electricity grid based entirely on renewable energy. “They can do something that ordinary computers cannot,” said Brynjar Sævarsson, the lead on the project. “ This means we can develop the tools needed to safely and stably operate an electrical system based on renewable energy.”

DTU students take their skills abroad
Two engineering students at DTU, Nicole Priddey and Anders Sonesson, have returned from Sierra Leone where they were providing technical support to Masanga Hospital. With other volunteers lacking technical skills, the two students were quickly relied on for tasks such as the installation of repair and maintenance systems and the upgrading of the hospital’s electrical installation.

EU investing 45 million kroner into electric truck project
A new project funded by Horizon Europe is seeking to develop high-performance power converters for heavy duty electric transport;, and Aarhus University researchers are at the forefront of the effort. Corneliu Barbu, an associate professor at Aarhus University, is responsible for developing the “brain” for the new trucks so that energy can be quickly and efficiently transferred from the battery to the engine. “Our goal is to develop technologies that are both robust and cost-effective, and we expect to have a prototype ready in three to four years,” said Barbu.

Comprehensive new dataset describing Danish disease mortality
A group of researchers at Aarhus University has just published the most comprehensive survey to date of the mortality of more than 1,800 diseases. Dubbed ‘The Danish Atlas of Disease Mortality’, it is based on anonymised registry data of 7.4 million Danes in the period from 2000-18. The newly-compiled data will be used to help doctors make more accurate prognoses, as well as assist health authorities and politicians in policy-making.

Polar bears in Southeast Greenland adapting to melting ice
A new population of polar bears has been discovered in southeast Greenland, surviving despite the absence of sea ice. Living and hunting in a manner markedly different from other polar bear populations, they “survive in a special way”, Kristin Laidre, a senior researcher at the University of Washington and the Greenland Institute of Nature, told Videnskab.dk. Laidre and a team of Danish researchers have published a study detailing the discovery, but they and other experts warn that rising temperatures will continue to threaten this and other polar bear populations.