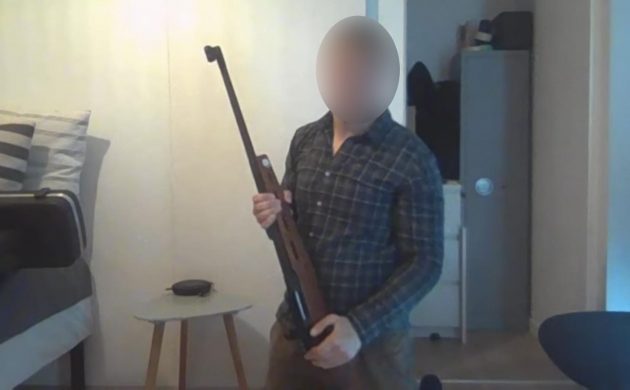 A man believed to be the Field’s shooter uploaded a video before the attack holding guns and saying medication doesn’t work
July 5th, 2022 11:28 am| by Jared Paolino

The man arrested for killing three people and wounding several others during a shooting at Field’s shopping mall will be remanded in a psychiatric facility for 24 days, the police said Monday.

The 22-year-old Danish man had been known to psychiatric professionals, police said earlier, and there is no indication that the shooting was terror-related. They believe the gunman acted alone and selected his victims at random.

The suspect has been charged with manslaughter, and the judge that heard the case on Monday imposed a ban on naming both the suspect and 10 victims specified in the charge.

Three killed, several injured
The shooting took place on Sunday at multiple locations inside Field’s. Social media footage showed people fleeing and heavily-armed law enforcement officers on the scene. The suspect had a rifle and ammunition when he was arrested, police said.

Two 17-year-old Danish citizens, one male and one female, and a 47-year-old Russian national were killed in the attack, revealed Soren Thomassen, Copenhagen’s Chief of Police, at a press conference on Monday.

Two other Danes and two Swedish nationals received gunshot wounds and were in a critical but stable condition, said Thomassen, while several others sustained minor injuries leaving the mall. In all, 27 people were injured in the attack, with 20 of them “lightly injured during the evacuation”.

Suspect allegedly posted video day before attack
The day before the shooting, a man believed to be the 22-year-old gunman uploaded several videos to YouTube. Three of these videos were titled “I don’t care” and showed the man pointing a hunting rifle and a pistol towards his own head.

In the description of one of the videos, the uploader wrote “Quetiapine doesn’t work”. Quetiapine is an anti-psychotic drug licensed in Denmark to treat schizophrenia, bipolar disorder and major depression.

These videos and the suspect’s channel have now been removed from YouTube for violating the platform’s community guidelines.

Threat assessment remains unchanged
The shooting was the deadliest instance of gun violence in Denmark since February 2015, when a 22-year-old man was killed in a shootout with police after killing two people and injuring five others. That attack was determined to be an act of terrorism.

Politiets Efterretningstjeneste, the police intelligence service, has said that the shooting on Sunday does not change the threat level in Denmark.

“Sunday’s shooting in Field’s is currently being investigated as a murder case, and therefore it does not currently give reason to change the terrorist threat assessment against Denmark, which is still serious, “ said the intelligence service in a statement to DR News.

“PET continuously monitors the investigation , with a view to whether there are factors that may be relevant to the assessment.”

Memorial services today
At 20:00 today, a memorial service will be held on Ørestads Boulevard by Field’s, which will stay closed for the next week at least.

In preparation for the service, the road between Arne Jacobsens Alle and Hannemanns Alle will be blocked to traffic today, Copenhagen Police said on Twitter, and will be reopened at midnight.

The Tour de France will also pay tribute to the victims of the shooting with a minute of applause at the start of the fourth stage in Dunkirk today, organisers said.