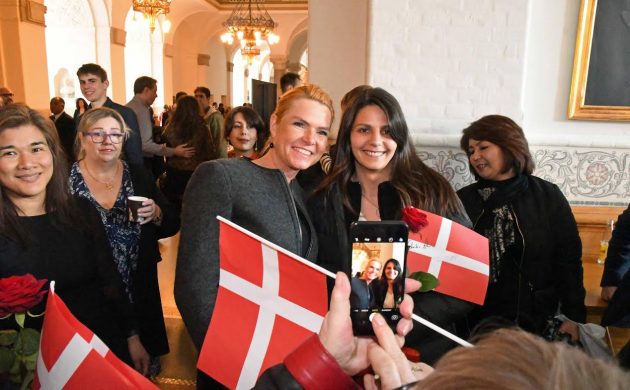 Inger Støjberg was a member of Venstre for 20 years before she left the party, was thrown out of the Folketing, and sent to prison (photo: Hasse Ferrold)
July 8th, 2022 12:30 pm| by Jared Paolino

Just one week ago, Danmarksdemokraterne collected well over the 20,182 voter declarations needed to secure a place on the ballot – only eight days after Inger Støjberg founded the party.

Now, less than a year after being impeached, convicted, sentenced to prison, and kicked out of Folketinget, Støjberg and her new party are poised to reshape the Danish Parliament.

In the first poll since Danmarksdemokraterne became eligible to stand for election, the party had the support of 10.8 percent of respondents – it was surpassed only by Socialdemokratiet, Venstre, and Konservative.

This is despite the fact that Støjberg’s party still has no official agenda, program or platform.

“I think and hope that it is because the Danes are well aware of where I stand and what I want to fight for,” Støjberg told TV2.

Mink Commission fallout
The new poll comes just weeks after the Mink Commission report, which concluded PM Mette Frederiksen had acted illegally when ordering the mass culling of the country’s mink – a finding that ultimately led to Radikale threatening a vote of no confidence if an election is not called by October 4.

While it is still unclear if the prime minister will bow to Radikale’s demands, the recent poll suggests ‘Minkgate’ has steered voters away from Frederiksen and her party.

Blue bloc growing
Støjberg’s resurgence – and Frederiksen’s fall – may give the ‘blue bloc’ the opportunity to retake Folketinget, according to the poll.

As a whole, the right-wing parties of the blue bloc are up 3.1 percentage points from the 2019 election. In particular, Konservative and Nye Borgerlig have improved, though both have lost some voters to Danmarksdemokraterne in recent weeks.

At the same time, Moderatetrne is getting a big enough piece of the pie to push one coalition into the majority, potentially giving Lars Løkke Rasmussen an opportunity to play kingmaker.

Since February, the party has lost 11 of its 16 seats in Folketinget, with Kristian Thulesen Dahl, Søren Espersen, Peter Skaarup and Dennis Flydtkjær jumping ship, some to join Støjberg’s party.

According to the poll, only 1.7 percent of Danes intend to vote for the party, meaning if an election were called today, the party would fail to meet the threshold to obtain any seats in Parliament.