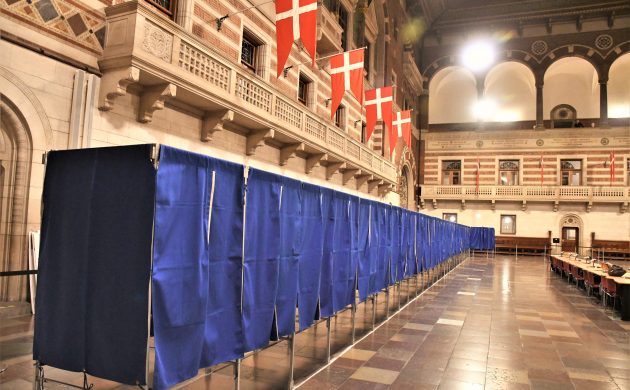 All the votes are in! Voting booths closed across the country at 20:00 and now it’s just a question of counting the ballot slips. And according to the exit polls, the 2022 Danish General Election could go down to the wire.

An Epinion exit poll based on votes cast by 4,161 voters immediately arrived following the closure of the stations and several big stories have emerged.

The polls suggest that PM Mette Frederiksen’s party Socialdemokraterne looks set to land 23.1 percent of the vote – down 2.8 percentage points compared to the election in 2019.

But perhaps the big story tonight so far is that the new parties, Lars Løkke Rasmussen’s Moderaterne and Inger Støjberg’s Danmarksdemokraterne, will both make impressive election debuts.

Moderaterne look set to sweep into Parliament with 9.3 percent of the votes, while Danmarksdemokraterne aren’t far adrift on 6.9 percent.

Liberal Alliance, meanwhile, look set to enjoy a fantastic election. After barely scraped into Parliament in 2019 with 2.3 percent, the exit poll has them shooting up to 9.0 percent.

Traditional Blue Bloc party massacres
The bastion of Danish Blue Bloc politics, Venstre, are in for a difficult night and have slid 9.9 percentage points compared to 2019. With 13.5 percent of the votes, Venstre looks poised to have its worst election in 34 years.

Konservative, whose leader Søren Pape Poulsen looked to be a strong PM candidate just weeks ago, have tanked in the polls and sit at just 5.5 percent.

Barely managing to scrape in this time is Dansk Folkeparti, which will have its worst election in party history if the exit poll holds true.

The party sits at just 2.5 percent (down 6.7 percentage points from 2019) and could struggle to amass the 2.0 percent needed to make Parliament.

Should they fail, they will join Kristendemokraterne and Frie Grønne, which both look long shots to make the 2.0 percent limit.

In the Red Bloc, Socialistisk Folkeparti are sitting pretty at 9.6 percent (1.9 better than 2019), while Alternativet have also made inroads to rise to 3.9 percent (0.9 better). Enhedslisten, meanwhile, have fallen back 0.7 percentage points to 6.2 percent.

Radikale – the party which triggered the election to begin with by forcing Mette Frederiksen to call for an election due to a no-confidence vote threat – will take a beating. It will come close to seeing its vote halved to 4.7 percent.

READ ALSO: 2022 General Election: What to look out for on November 1 and beyond

Kingmaker Lars
So. What does it all mean for a new government in Denmark?

Well, based on the exit poll, without including Moderaterne, Red Bloc will win 85 mandates compared to the Blue Bloc’s 73.

Neither bloc has the 90 mandates required to assume the reins of power, so Lars Løkke Rasmussen will likely be ‘kingmaker’ for the next PM of Denmark. His projected 17 mandates can swing the tide for either bloc.

It’s quite the turnaround for a man who only started his party less than a year ago.

But there are plenty of twists and turns ahead on a long election night, and an exit poll based on just over 4,000 votes can’t be considered gospel.