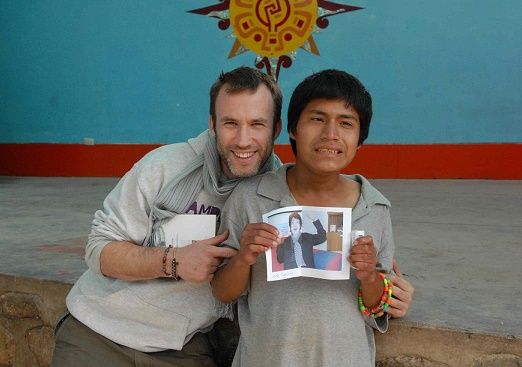 Benjamin Ward with Fernando, who is holding up a picture of his sponsor, Ward’s mother (photo: flickr/Team Peru Denmark)
March 18th, 2018 6:00 am| by Douglas Whitbread

‘Team Peru’ is an overseas learning program created by Copenhagen International School. The program, which originated in 2005, provides students with the opportunity to work with Peruvian children who have physical or mental disabilities. This takes place at a dedicated centre located in the far north of the country in the high desert mountains.

The centre has a permanent staff that include: a physiotherapist, psychologist and a speech therapist. However, CIS students’ participation in the Team Peru program strengthens the overall service offered to the affected children.

Benjamin Ward, who co-founded Team Peru and helped run the program from 2005 to 2010, discussed its background and legacy in an interview with The Copenhagen Post.

Why Peru?
The idea for the project originally came from the school students. “Children at CIS wanted to be directly involved in a global project in which they could practically and directly contribute to help the lives of others,” Ward explained. “They had a lot to offer such as time, resources, talent and motivation. However, they did not know where to focus their attention.”

Those who conceived the program wanted to understand how international aid was spent outside of Denmark. “Students at CIS were like many people – tired of simply donating money without any knowledge or oversight over how it was spent,” said Ward.

“The program gave them the chance to take part in a global cause in which they felt they could best help others.”

Valuable knowledge
Students were able to gain first-hand insights into the role and work of long-term aid-volunteers. “The experience means students learn to understand that their responsibilities as humans extend across-borders to those who are some of the most vulnerable on the planet”.

However, it was also important for students to understand the conditions through which aid should be offered and delivered responsibly. “The program simultaneously allows students to appreciate that both emotional and financial support is required to help those in desperate need of assistance.”

Skills and self-awareness
Ward suggested that through their work, those who participate on the program acquire a rage of useful personal attributes. “Students who go on the Team Peru program get to engage in meaningful tasks whilst abroad. This means they gain proficiency in skills such as: public speaking, team building and leadership abilities.”

The experience of working with the program often led CIS students to change their attitudes and perspectives. “In my opinion, the greatest impact of the program upon their education is that it allows students to reflect on their home-lives,” Ward averred. “This is because those who attend the Team Peru program learn to respect the advantages that they have gained as young people in Denmark.”

National significance
Ward said that the work that students undertake on the Team Peru program had far reaching consequences and worked on two different levels.

The first part of the equation is the direct aid provided to Peruvian children with mental and physical disabilities in need in the specific location where the program is based.

However, Ward added that “Team Peru also draws to attention the plight of children who face similar challenges in other parts of the country. The actions and activities of students and staff who work on the program therefore also spread awareness and knowledge on a national scale – throughout the whole of Peru.”