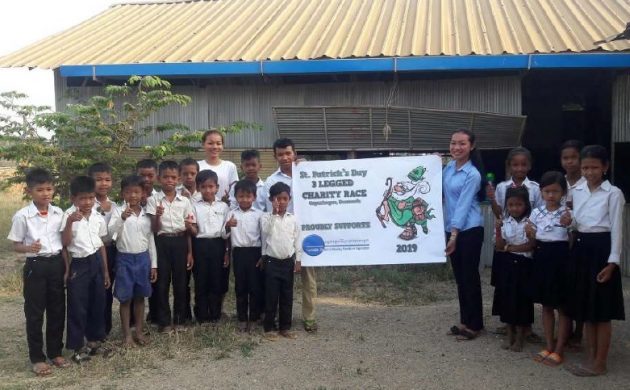 CCAFO in Cambodia will spend most of the donation on soap for its staff and students
March 24th, 2020 9:27 am| by Ben Hamilton

The St Patrick’s Day 3-Legged Charity Race still managed to raise 15,000 kroner for its chosen three children’s charities despite not taking place on March 17 due to coronavirus restrictions.

Supporters of the initiative gave gladly to the charity appeal, mainly making donations by MobilePay, as the organisers of the race rallied round the Irish, international and wider Danish communities for support – and even further afield!

“We were overwhelmed with all the support on the day – both in donations from the general public and the many kind words of support we received,” she said.

“We use the shamrock as a symbol to spread some love around our community and beyond – this is what we call ‘Shamrock Love’. There wasn’t a celebration this year, but thanks to everyone who donated to the charity, the Shamrock Love still flowed.”

Three extremely good causes
The beneficiaries of the donations were Danske Hospitalskovne in Denmark, Laura Lynn Children’s Hospice in Ireland and CCAFO, a school in Cambodia.

“That is so very admirable and in difficult times it warms our hearts to receive news like this – we cannot thank you enough!” enthused Danske Hospitalsklovne, while an equally thankful CCAFO revealed it would spend most of the funds on buying soap so its students could protect themselves from the coronavirus.

Laura Lynn Children’s Hospice was quite simply “blown away”, adding: “You clearly have an incredible community surrounding the 3-Legged Race!”

Thanks to the sponsors
Since becoming a charity race in 2007, the race has raised 517,000 kroner – mainly derived from entry fees and donations, which it is able to retain in full thanks to the generosity of Guinness, the race’s main sponsor, which takes care of all the costs.

The Radisson Collection Royal Hotel was also onboard this year, donating a special prize that anyone donating over 50 kroner was eligible to win.

In the end it was a familiar name who triumphed. Mads Bille of Team Tutu, who has competed in 14 races, winning on more than one occasion, will get to spend a night in the Collection.

But there is no word yet on who he will be enjoying breakfast with the next day: the other member of Team Tutu, or an even more significant other.