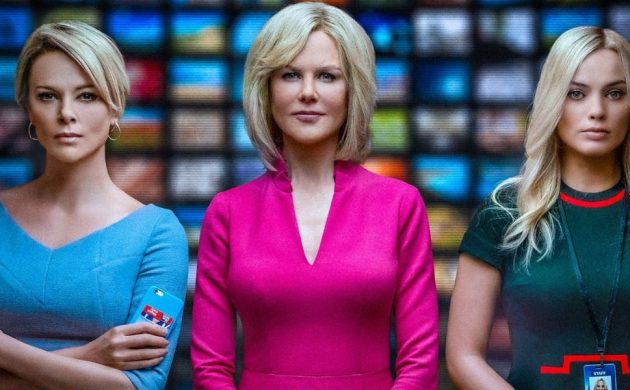 The days of outfoxing these blonde bombshells are definitely over
February 7th, 2020 3:02 pm| by Ben Hamilton

Australia’s to blame. Nicole Kidman’s hit the bottle – not in the normal Hollywood sense – to team up with Cate Blanchett, Naomi Watts, Margot Robbie and Toni Collette to give us quite a quintet, and the parts keep on popping up.

Blonde is the bomb
It helps if you keep on depicting the lives of American news anchors – whose eternal blondness is written into the Constitution. Just last year, Watts portrayed Gretchen Carlson in The Loudest Voice, and now Kidman is portraying her in Bombshell (64 on Metacritic; Feb 27). With Robbie and Charlize Theron lending their fair curls to the film, this is the blondest promo since the first season of Vikings.

Following in the trail of Russell Crowe’s Mr Blobby depiction of Roger Ailes – John Lithgow does his best, while Malcolm McDowell is a malevolent Rupert Murdoch – it’s been more popular with the awards than audiences. The same can’t be said of Birds of Prey (Not Released Worldwide; Feb 6) in which Robbie, certifiable blonde, reprises her role from Suicide Squad to show us another shadowy corner of the DC Extended Universe.

Far more genteel is the British countryside setting for Emma (NRW; March 5), a big screen Jane Austen adaptation more in the vein of Love & Friendship than old school Sense & Sensibility. In the title role, Anya Taylor-Joy, snooty blonde, is less cuddly than the likes of Gwyneth Paltrow and Alicia Silverstone. It looks promising, but how many more times (there were three in 18 months in the mid-1990s!) can we revisit this story?

Talking of old tales, The Invisible Man (NRW; Feb 27) sees Elizabeth Moss, kickass blonde, stepping into the shoes vacated by Elisabeth Shue in Hollow Man 20 years ago. That’s right, the ability to make oneself invisible is no longer worth a whole movie, and Vizzy has gone rogue again in what is described as an extremely loose adaptation of the HG Wells classic.

Underwater (49; Feb 27) is more than a mild rip-off of Alien. Set 10 km beneath the surface of the Pacific, Kirsten Stewart, bottle by blonde and nature, takes on the Ripley role – we’re only presuming all the male characters die first, but it’s a safe bet, right?

And finally, to complete our sextet of blonde leading ladies we have All the Bright Places (Netflix; Feb 28) starring Elle Fanning, wispy blonde, who in recent years has overtaken sister Dakota in the same way that Elizabeth Olsen overtook the bratty twins. Fanning grew up on film, playing the younger-selves of her sister on the likes of I am Sam.

Oscars missed this hidden gem
Sean Penn’s disappeared, but friend and collaborator Terrence Malick certainly hasn’t. This month’s pick, A Hidden Life (78; Feb 13), is a little like The Sound of Music. Rolling hills – yes! Three hours long – yes! An Austrian who doesn’t want to fight for the Nazis – yes! Music – no! Cast entirely with European actors, including the late Mikael Nyqvist (Mikael Blomkvist in the Millennium saga) in his last ever film, Malick gives us another profound, deeply-felt work to place alongside The Thin Red Line and The Tree of Life.

Malick could have some competition in Horse Girl (Feb 7, Netflix) starring the likeable Alison Bree from Glow as a quirky, quickly-going-wacko kind of gal. But we won’t be recommending The Gentlemen (51; Feb 27), sadly. How can we put this? You know when Snatch came out and we kind of shrugged and said it’s okay but not as good as … well, if this was Snatch, we’d be hailing it as the film of the year. Guy Ritchie so sorely needs a hit after so much shit, but this isn’t it.

Completing this month’s film releases are Fantasy Island (NRW; March 5), which reimagines the 1970s TV series with the dwarf from Don’t Look Now, Krudttønden (NRW; March 5), a Danish depiction of the 2015 terror shootings, Sonic the Hedgehog (NRW; Feb 13), which should have stayed on a permanent vacation on PlayStation, Call of the Wild (Feb 20) in which Harrison Ford teams up with a CGI dog to make the worst buddy-doggy film since Turner & Hooch, and To All the Boys: PS I still love you (Netflix, Feb 12), which is all gimmick, no substance.

We’re okay with it
If we had to recommend a TV series it would be US coming-of-age series I Am Not Okay with This (Netflix, Feb 21), which like The End of the F***ing World is based on the work of comic book author Charles Forsman.

Netflix won’t let up with the brainstorming sessions though. We have Locke & Key (Netflix, Feb 7), which looks like somebody has read some Narnia books and dreamed up a series set in the wardrobe house in the time it took for Lucy to be seduced by a fawn, while we’re guessing Gentefied (Netflix, Feb 21) started with the title and worked from there: So it’s a mixed-gender couple, she used to be a he, he used to be a she, her hipster neighbourhood used to be a slum, and he lives in Østerbro etc.

Fast-made shows are becoming the norm, and Variety questions whether McMillions (HBO Nordic, Feb 4) could have been more artfully made. Despite dealing with an unbelievably engrossing story about a nationwide scam, which many refer to as the ‘Monopoly-game heist’, Variety found that the tone was all “snideness and contempt”, like it was elbowing the viewer in the ribs and asking them “Do you believe these people?”

Kind of reminds me of blondes being cast as airheads. But not anymore, ladies!