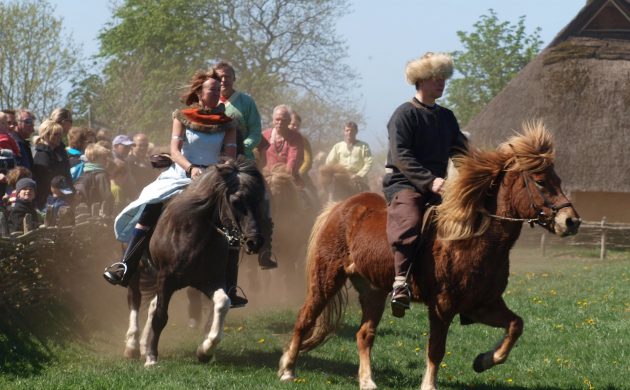 Overlooking the strong surf of the North Sea, the mostly open area offers ample trails for nature lovers and wildlife enthusiasts to explore.

An extraordinary line-up
From the south to the north, west Jutland’s shoreline has more than enough to keep you entertained for days.

From the one-of-a-kind Wadden Sea National Park and ‘festival island’ of Fanø, to the culinary fare of the beach town of Henne and historic settlements of Ringkobing, Ribe and Hvide Sande, this is one journey you won’t regret taking.

Denmark’s inner beauty
Begin your journey at the Wadden Sea National Park, which in 2014 was added to UNESCO’s World Heritage List. Extending along 500 km of coastline in the Netherlands, Germany, and Denmark, this unique nature reserve is one of the world’s largest tidal flats. The best way to explore the area is either a combination of hiking and island-hopping or via two wheels, as it includes one of the longest bike trails in the world: the North Sea Cycle Route. As well as the wildlife, the ancient natural scenery, shaped by the wind and sea over millions of years, hides tales of woe in its hazardous shallows as many seamen have lost their lives in shipwrecks in areas such as Horns Rev – the Devil’s Horn.

Country’s oldest town
More than 1,300 years old, Denmark’s oldest town, Ribe, has a fascinating medieval past as an important trading centre that brought merchants from western Europe into contact with Scandinavia. Walking along cobble-stoned narrow streets lined with well-preserved houses, it feels as if time has stood still in Ribe. No visit is complete without a bit of shopping in and around the Viking marketplace – the very point where the longboats would leave to trade and slay a thousand years ago – which each May hosts the largest crafts market of that era in Denmark.

The island of festivals
Despite its size and small population, the island is a popular destination as several festivals take place during the course of the year, including a seal safari, knitting festival, international kite meeting, oyster festival and international dragon-fly festival, as well as an international golf tournament, Fanø Golfuger. History buffs will be drawn to the Atlantic Wall, a huge defensive system built by Germans during WWII to prevent an invasion from western allies, and the 300 bunkers still along its western coastline. While watersports fans will love its broad sandy beaches, which are perfect for all kinds of activities.

Stars and strand
Notable for its white sandy beaches, shaded dunes, and trails for hiking and wildlife viewing, Henne Strand was listed by CNN as one of the best places in Europe to visit in 2019. If you feel like splashing out on land as well as at sea, check out Henne Kirkeby, a two-star Michelin restaurant that has been serving food since 1790.

Hygge dialled to eleven
In the middle of the Holmsland Klit (Holmsland Dune), a narrow ribbon of sand formed by the wind and tides that separates Ringkøbing Fjord from the North Sea, is the harbour town of Hvide Sande. Turn the hygge dial up to eleven as it doesn’t get much better than eating fresh fish hooked in nearby Ringkøbing Fjord, smoked or not, on rye bread with a cold beer in your free hand. The picturesque scenery of an endless horizon coupled with the impressive sand dunes and heather-covered hills leave you with no other choice than to just belong to the moment.

Gateway to your palate
At the northern end of the Holmsland Klit, you’ll find the small town of Søndervig. Nicknamed ‘the gateway to the North Sea’, this tiny town has been a popular holiday destination since 1800. On top of its stunning, wide white beaches, it offers epic culinary experiences. Top tip: find a farm-shop that has its own kitchen and go wild on the fresh ingredients and local specialities.

Candy capital
Heading inland in west Jutland will bring you to the oldest town in the area, Ringkøbing, which is famed for its distinctive red-brick houses. While this idyllic town, which is often referred to as west Jutland’s little capital, was founded in the 13th century, its name actually means ‘the market town near Rindum’, a nearby village with settlements dating back to the 6th century. A firm upholder of traditions, Ringkøbing has for centuries been well known for its production of naturally-flavoured, hand-made candies, called ‘bolcher’.