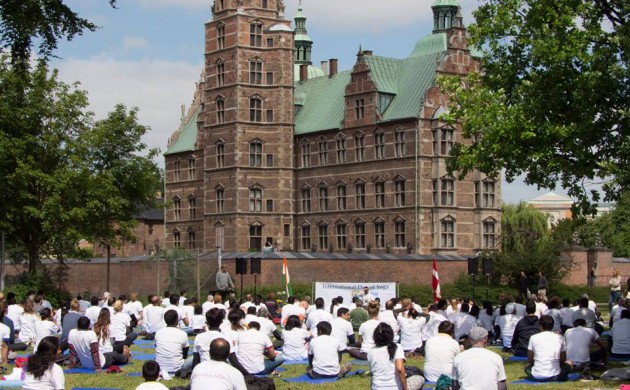 The event was celebrated in open spaces in the iconic location known as the King’s Garden with the Royal Castle in the background. The event was well publicised which resulted in more than 450 yoga enthusiasts attending, probably the largest yoga event organised in Denmark.

Lone Dencker Wisborg, the Danish state secretary, was the guest of honour and she was accompanied by some officials from the Ministry of Foreign Affairs.

The program was initiated by the Indian ambassador to Denmark, Shri Rajeev Shahare, who in his welcoming remarks, highlighted the Indian origin of yoga, its benefits etc. Shahare also participated in the yoga session that followed.

The event lasted about an hour and was conducted under the supervision of yoga expert, Rahul Alinje, and included an overview of the benefits of yoga and a demonstration of its important asanayas and postures. The program was arranged to spread awareness of yoga in all arenas, both for the uninitiated as well as the seasoned practitioners.

A healthy lifestyle
The attendees were represented by a broad cross section of Danish society from regular yoga enthusiasts and students to prominent members of the Indian diaspora and representatives of yoga institutes, such as Natha Yoga, Art of Living, Bikram Yoga, Hatha Yoga, Danish-India Association and International Yoga Sports Federation.

The event enjoyed wide coverage in the Danish media thanks to the embassy collaborating with local organisations like Wonderful Copenhagen and international partners like UNDP.

Overall, the event was well received and served to highlight the importance of yoga, as a part of a healthy all round regimen.

This is a sponsored article