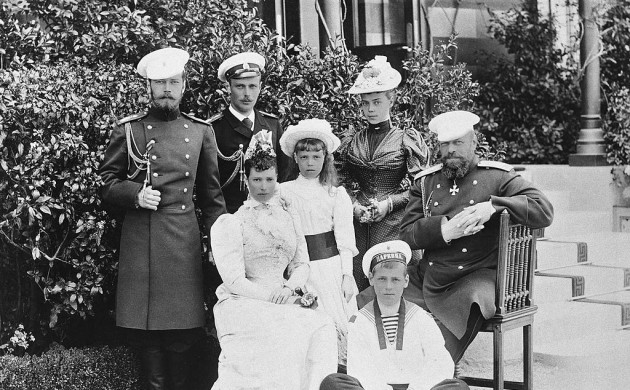 Family of Alexander III at the Small Palace of Livadia in about 1892. Princess Dagmar is seated (photo: unknown)
October 10th, 2016 7:59 pm| by Jane Graham

To many non-Danes, Princess Dagmar probably means nothing. The great, great aunt of Queen Margrethe died in 1928 in her suburban Copenhagen villa and was buried in Roskilde Cathedral.

On the other hand, mention Empress Maria from Disney’s animated Anastasia (as voiced by veteran star Angela Lansbury), and there may be more than a few nods of recognition.

In fact, unlike the Anna Anderson-Anastasia mystery, there’s no doubt here that Dagmar and Maria are one and the same person.

Any Romanov will do
How Princess Dagmar of Denmark came to be known as the Empress Maria Fedorovna is one of those fairy-tales of history to which, however, there was no happily ever after.

Instead, a Bolshevik revolution is to blame for her somewhat inauspicious final years in Hvidøre in what is now Copenhagen’s Whiskey Belt (with an annual allowance from the family).

It was the end of an extraordinary life that saw her status yo-yo according to who was barren and butchered.

At the age of four, her relatively impoverished father (by the standards of the German nobility) unexpectedly became the heir to succeed the childless Frederik VII, and by the time she was 15, she was a princess.

READ MORE: The lost princess: How the Schleswig- Holstein Question just got even more complicated

When her parents’ marital match of Tsarevich Nicholas Alexandrovich, heir to Tsar Alexander II, died of bronchitis in 1865, it seemed to matter little, and in no time at all Dagmar was betrothed again to his brother, Grand Duke Alexander Alexandrovich.

She didn’t appear too phased by the switch of affections; who wouldn’t be impressed by a man remembered for his ability to bend iron rods?

Russification of Maria Fedorovna
With a speed and efficiency to be admired, Princess Dagmar mastered the notoriously difficult Russian language and was baptised in the Russian Orthodox faith, recreated as Maria Fedorovna.

Married in St Petersburg in 1866, there was little trace of simple, vivacious Dagmar in the imperial court of Maria Fedorovna; if her enthusiasm for mastering the language was impressive, it was nothing compared to the way she threw herself into the sumptuous consumption of one of the world’s most decadent and glamorous societies of the time.

Her sister Alexandra, who’d been married off to scary old lady Queen Victoria’s eldest son Edward, the Prince of Wales, must have been green with envy.

Pampered, nay suffocated
History as well as Hollywood warns us, though, that a life of luxury does not last, and Maria Fedorovna’s offspring were to be some of the last members of the Romanov dynasty. She and Alexander (known as ‘the bear’) had six children, of which five survived infancy, a brood Maria Fedorovna pampered to the point of suffocation.

READ MORE: Consorting with the kings and tsars for nearly a millennium

When the eldest, the heir apparent Nicholas, reached adulthood he knew more about soft fabrics and fine foods than ruling a nation on the brink of revolution.

Two things happened in November 1894. Frstly, Tsar Alexander III died of nephritis, forcing his son Nicholas to take his place. And then less than four weeks later he married Princess Alix of Hesse and by Rhine, who had been brought up under the strict guidance of her British grandmother Queen Victoria and was about as much fun as watching paint dry.

This clear example of inter-breeding was much disliked by his mother, who had a perfectly understandable hatred of Germans given the events of 1864.

Russia’s greatest love machine
As Nicholas and Alexandra’s devotion to each other began to alienate them from the rest of their family, this imperial rift only added to the rising instability within Russia. Alexandra had four beautiful daughters, but no heir; a son finally born in 1904 had haemophilia – a hereditary condition known as the ‘royal’ disease.

Grandmother Maria, having grown estranged from her beloved son, immersed herself into St Petersburg society, charity work and travelling. She also had a yacht, the Polar Star, which she summered on.

Harrowed in Hvidøre
This was to change with the Bolshevik revolution in the spring of 1917, which plunged Russia into civil war and led to the execution of Nicholas, Alexandra and their family in 1918 and brother Michael a little later.

Maria Fedorovna left the country for the final time with what remained of her family in 1919 onboard the British ship HMS Marlborough, which stopped first in Malta before docking in England.

Maria stayed first with her sister’s family there, but she was not suited to playing second fiddle and returned to her roots in Denmark. Right up until her death in 1928, it appeared her life had frozen with the revolution: from her Hvidøre villa, she waited quietly for a sign her sons and grandchildren had somehow survived.