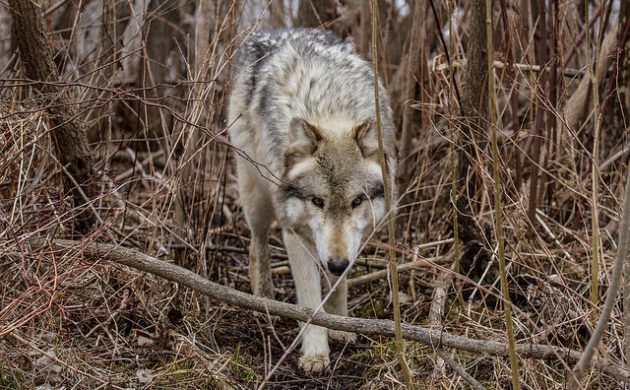 Wolves often settle down in reserves due to the convenience of resources (photo: Flickr, Max Goldberg)
April 11th, 2018 7:07 pm| by Diala Arsofli

Imagine taking an evening stroll through the woods and hearing a howl. You might be alone or with your child or a dog, and your pace quickens. You’re too slow though, and a wolf emerges, just five metres away. It bares its teeth.

To most city folk, such a scenario belongs in the realms of fantasy. However, many rural Jutlanders claim that such an encounter is becoming increasingly likely since the animal’s return to Denmark over the last decade, following an absence of two centuries.

A divisive issue
Their presence is becoming a divisive issue: between those concerned with animal welfare and those who might want to study them, and farmers living in fear that their animals might be killed, along with dog-walkers and ramblers.

And this past week, the clamour for government intervention has been getting louder, with one lobby group advocating mass extermination and a politician even presenting a conspiracy theory about the wolves’ origins.

A call to arms
As its name suggests, Ulvefrit Danmark was founded in mid-February with one main aim: to free Denmark of all its wolves. It argues the country is too densely populated for the animals to flourish.

The organisation is holding an open meeting on 16 April in Ørnhøj in northwestern Jutland to raise awareness of the issue – particularly among politicians.

Conspiracy theories rising
Dansk Folkeparti politician Søren Espersen certainly seems to be aware of the issue, and he has an unusual opinion on how they first showed up in 2012.

He doubts the wolves simply travelled to Denmark on their own, he tells Videnskaben.dk.

Scientist unconvinced
Espersen suspects certain interest groups were behind the introduction, and that the first wolves might have been set loose near Hansted Reserve, a protected area they then settled in.

However, Kent Olsen at the Naturhistorisk Museum in Aarhus isn’t so sure. He argues that wolves are more than capable of travelling long distances on their own.

The numbers game
So far, 16 different wolves have been documented in Denmark since the first sighting in Thy in 2012.

And already they have been responsible for the deaths of many livestock animals – mainly sheep. According to the Miljøstyrelsen environmental protection agency, there were 56 wolf attacks between 2012 and 2017, with 20 last year alone.