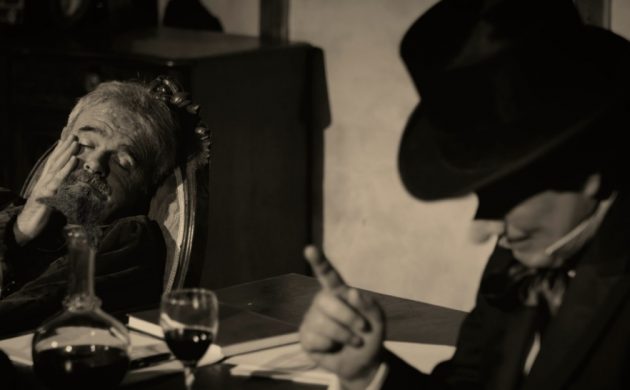 Once Hans Christian Andersen (Peter Holst-Beck) had outstayed his welcome at the home of Charles Dickens (Ian Burns) in 1857, the Englishman couldn’t wait to be rid of his Danish guest, but this is one visit that you won’t want to end!

Holst-Beck and director Barry McKenna have fashioned a wonderfully witty script based on the true story of the writers’ encounter, and Burns and Holst-Beck make a delightful pairing.

The staging is pretty minimalist, but with actors this good, your imagination doesn’t need to work hard.

Bellowing with laughter with Barry
Chief writer McKenna is no stranger to penning feel-good comedies. Anyone who saw the CTC pantomimes ‘Cinderella’ or ‘Aladdin’ a decade ago at Krudttønden will testify to his ear for a comic beat. He specialises in throwaway lines, knowing looks and furious banter.

At That Theatre he has demonstrated his talent by mining literary sources for gold in plays such as ‘Shakespeare’s Women’, a play rich in language that he co-wrote with Burns in 2013 in dedication to the Bard’s female muses.

‘The Visit’ is likewise laced with nods to the worlds of both writers, but you don’t need to be well-versed to appreciate what is going on – well maybe a Thumbelina’s worth.

The chief inspiration for ‘The Visit’ is a book that McKenna discovered by chance a few years ago, which was written by HC Andersen about the events, and remarkably almost all the details in the play, however farcical they may seem, are based on fact! Tell that to anyone who says some scenes are a bit ropy.

Big shoes to fill
For the character of Andersen, McKenna has not held back from portraying both the writer’s attributes and failings, and this is the play’s most notable dramatic achievement.

While we are entreated to marvel at the innocent genius of this most beloved of writers – for example in the scene when a cricket miraculously comes to life (or does it) on his leg as he talks to an almost disbelieving Dickens – Holst-Beck is also given enough elbow room to present the sharp edges and neuroses of a deeply flawed character.

Perhaps to Dickens, the script is too kind, and it would have ultimately been served better had our sympathies been more divided – for example, it might have helped had we not laughed as much in our complicit bullying of the ‘Boney Bore’. Burns breathes gusto into the character of Dickens, but the role is not as nuanced. In the final scenes we learn the English novelist is far more comfortable with his public life and in no doubt his legacy is assured. It’s left to Andersen to provide the poignancy.

Plugging in the gaps is Andrew Jeffers who manages to fill as many as six or seven parts – most notably as Dickens’, it has to be said, extremely unattractive wife. For admirers of the English actor, particularly of his verve as The Dame in the Crazy Christmas Cabaret, this is a real treat (if you know any Danish fans of the show, they will love you forever for buying them tickets) as he is given most of the plum lines and grimaces.