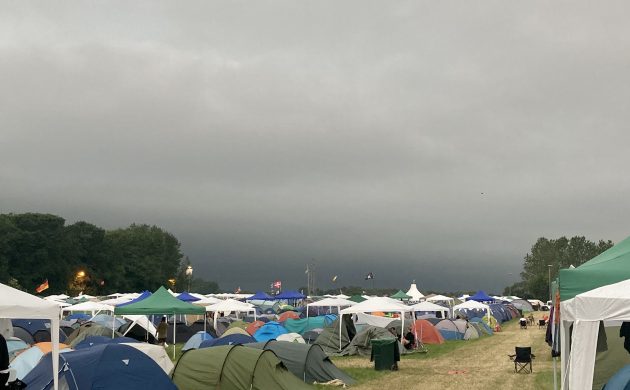 An orange smear bleeds across the weather radar, painting an ominous streak across Zealand to and north toward Roskilde.

A storm is coming.

Rumors of this downpour have been circulating for days. Neighbouring camps share news of the storm by word of mouth, baselessly speculating about it like Old World farmers.

This isn’t the first storm to hit Roskilde Festival, nor is it the worst. But it’s the first one of this year, and it marks a turning point. The darkening skies abort our sunburt summer whimsy, sending a stern reminder that we are merely nude apes at nature’s mercy.

At around 7pm on Monday evening, strong winds begin to rake the festival grounds. Empty beer cans blow past like tumbleweeds, and bottom-shelf pavilions are already threatening to buckle. When the rolling clouds on the horizon grow too big and dark to ignore, Roskilde’s revellers slide into the frantic, tipsy theatre of battening down the hatches.

Beers in the belly, bracing for impact

When it comes to storm preparedness, there seem to be two types of people here. There are those who scramble to brace their camp, lowering pavilions a couple of notches, tightening tents’ guy lines, and unrolling expensive raincoats.

Then, there are those who face the storm with the courage from a dozen warm beers. Resigned to their fate, they don’t bother waterproofing. They crank the volume up, refill their drinks, and accept a head-on collision with Neptune’s wrath.

At precisely 8pm, the first drops of rain begin to fall. What starts as a shower of spare, heavy droplets quickly turns into a relentless downpour. One can’t help but think that these sheets of rain are collapsing dreams across the festival grounds, condemning the ill-prepared to a week of wet sleeping bags and ruined tents.

“The rain’s refilling our pool!”

Down in sector J83, most Silent & Clean campers have vanished, tucked inside their tents. But one camp appears unbothered by the storm. A dozen people are packed underneath their white pavillion, jumping up and down in unison to some early 2000s europop.

One of them, a taller guy with big ears, explains to me that their camp’s come to Roskilde from Norway, the Netherlands, Spain and Denmark. They’ve come too far, and planned too much, to let this storm get in the way of things. Prompted to elaborate on his own waterproofing strategy, he tells me: “Drinking”.

Emma, from Bergen in Norway, is just outside this pavillion, dancing in the downpour. She’s facing the rain in a bucket hat and a bikini top.

“I’m having the best day of my life today,” she shouts. She points to a floppy inflatable children’s pool that serves as the camp’s beer cooler. “You’ve got to look on the bright side – the rain’s refilling our pool!”

In misery, we find camaraderie

Down in Silent & Clean, the large white shade tent in front of the food carts has come to resemble the Mercedes-Benz Superdome after Hurricane Katrina. Those whose tents have been washed away by this storm have come here for shelter.

Someone has their Soundbox on and has put on Rihanna’s ‘Umbrella’. Soon, the whole tent’s singing along to the chorus. Lightning rips across the sky, and a massive clap of thunder overpowers the music. This prompts cheers of applause from the singalong crew, as though the splitting heavens are simply pyrotechnics at Wrestlemania.

A quarter past eight, the horizon lightens. The rain is still falling, but it’s clear we’re on the other side of the downpour. The pre-storm panic is gone. Now, all that’s left is the dripping aftermath and the ecstasy of survival.

Along the neat lanes of Silent & Clean, the storm’s wake has left cheap pavilions upturned and twisted. Their spindly white polls splay out in all directions, like the remains of some giant albino spider. In the resource cycle of Roskilde, these broken limbs will become tomorrow’s impromptu flag poles, or playthings in a new drinking game.

Framed by this dripping wreckage, a handful of 40-somethings are dancing naked in the rain, singing along to The Weather Girls’ ‘It’s Raining Men’. One of these triumphant nudists, a man with a thick beard and respectable belly, tells me: “You can only get so wet when you are naked.”

In the boozy, make-do spirit of Roskilde, he’s right.