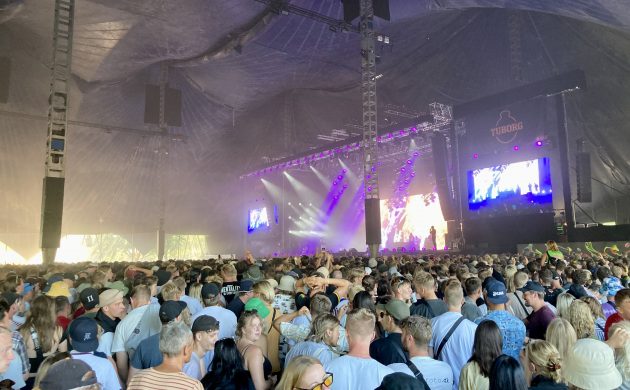 It’s ten minutes to eight, and Polo G is late.

On this baking Wednesday afternoon, the Roskilde Festival grounds have only just opened to the masses. The crowd overflows beyond the edge of Arena Stage’s pavilion. The murmur within sounds like a biblical swarm of horseflies. The restless crowd belts out the Seven Nation Army “lo, lo lo lo-lo-loooo, loooo” stadium chant, as is European crowd tradition.

At 7:55 pm, the battery of speakers belt out the bassline of Polo G’s ‘Flex’, and the Chicago rapper bolts out on stage to enormous applause. He’s wearing a baggy black graphic tee and a glittering diamond pendant the size of a dinner plate that reads ‘1300’. After his opener, he removes this chain, likely worth over a year’s rent for me, to reveal he’s wearing a similarly-sized, equally-glittery backup chain underneath.

Mosh pits opening like sinkholes
Through flattening bass and shrill snares, the thousands-strong crowd bucks and pulses in time with the beat. Mosh pits open like sinkholes, swallowing dozens in the abrupt scrimmage. It’s a young crowd, here to burn off energy and impress their dates.

As Polo raps, the massive digital screen behinds him blossoms with digital renderings. A nest of Cuban link chains writhe like serpents over a goat skull, backlit with a toxic green glow. Neat grids of bejewelled NBA championship rings sink one by one into an opaque blue milk. It’s some feverish triangulation between a Robert Eggers movie, Warhammer lore and Instagram promotions for Atlanta nightclubs.

Polo G doesn’t move around a lot on stage. But he raps clearly, able to cut through and command the roaring audience. There’s a vocal backing track to each song as a reserve parachute, and he often takes a break to let a few bars ride out on autopilot.

A lot of his songs drop off or fade out prematurely. It’s a little abrupt at times, but the crowd immediately fills the silence with their deafening stadium chants. When he attempts to cut the beat and have the crowd finish a chorus, it seems like the eager crowd isn’t as familiar with his lyrics as he’d like.

At one point, Polo’s DJ commands the crowd: “If you a day one Polo G fan, make some noise!” and an implausible percentage of the audience cheers in affirmation. This prompts the track ‘Finer Things’, from his 2019 debut album ‘Die a Legend’. From the tepid crowd response, it seems that a lot of these recent cheers were lying about their longtime loyalty. Maybe it’s just me, but Polo sounds tired as he sighs out the last bars of this one.

Fundamental disconnect
A few tracks later, Polo yells: “Put y’all hands up if y’all ever lost somebody!” and hundreds of hands go up. Then he sets into ‘I Know’, a track commemorating a childhood friend dead under pressures of poverty and instability in urban Chicago. It strikes me that the traumatic reality within Polo’s lyrics is alien and invisible to these Scandinavian revellers. For those raised hands, their experience of loss likely gravitates more toward a grandparent passing of old age.

The moment highlighted a fundamental disconnect. It’s present in some form at most any hip-hop festival act, but especially obvious with Polo G. His lyrics are so uncompromising in narrating the everyday trauma Black Americans recieve from poverty, the racist police state and street violence — yet, for the crowd, the music is just a soundtrack for downing another beer and barreling into a mosh pit.

Both sides of this stage were coming from profoundly different backgrounds, meeting this music on such different wavelengths. Polo G is giving what he knows, to the best his talent allows. The crowd’s loving it. But still, something about this dynamic feels off.

Does that disconnect matter? Should this foreign crowd be able to sift out the pain and complexities of Polo G’s music and distill the leftovers into pure party fuel?

I don’t have those answers.

At least Polo got a sweet paycheck out of this.