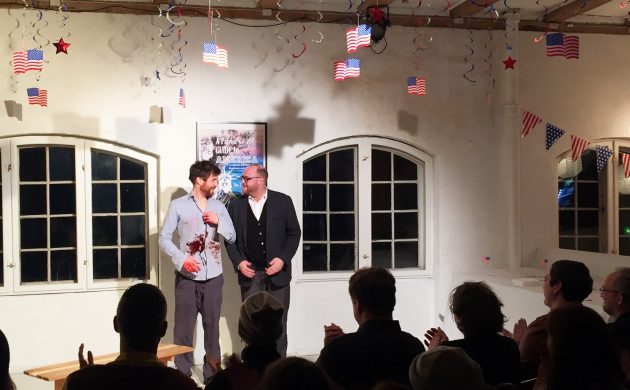 Adrian Mackinder first met Charlie Waller on a bench. Neither had sat on it before, so an altercation did not ensue about whose right it was to sleep on it.

And it didn’t end up being a suppressed alibi in yet another miscarriage of justice in the country they both call home. Neither have Irish names, after all.

Return to the Bench
The bench in question was a prop. Or at least it was a bench, but requisitioned as a prop for a short duration: the run of their play ‘The Zoo Story’, which they performed together at the original House of International Theatre in November 2017.

They had, of course, met before: that would be ridiculous … the two stars of a Edward Albee classic turning up on opening night having never rehearsed.

First performance for five years
Or maybe that’s not as absurd as it sounds: on Saturday November 5 they’re meeting at a bench again, this time at LiteraturHaus in Nørrebro, and this time they don’t even have a script.

It’s their first bout of improv since 2017. So call it ‘The Zoo Story 2: The Reunion’ if you like. Although they’re just keeping it simple and calling it ‘BENCH’.

Seeing double double
Eoin O Sullivan from the Coping in Copenhagen podcast, which you can find at cphpost.dk, and old sparring partner Sarah McGillion from Inconspicuous Comedy are onboard too with a show called ‘Moving Entranceways’. Some distinctly Irish names there, Flying Squad.

So the four of them are double-billing as part of a Inconspicuous Comedy night called ‘Seeing Double’ and, as an extra bonus, all four will join forces in the second half.

Book your tickets via this link.