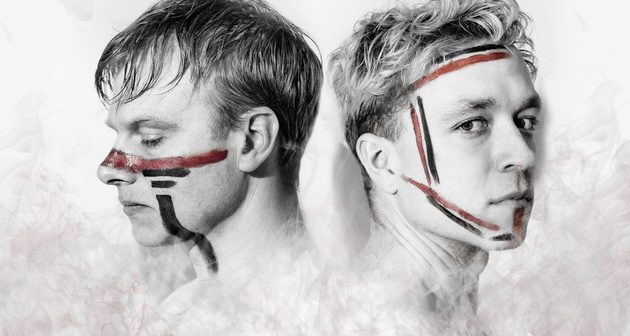 You’d think we wouldn’t want to watch films and TV series about pandemics, but nothing could be further from the truth.

The 2011 film Contagion was ranked 270th on the Warner Bros catalogue list in December 2019. Three months later it was at number two, while piracy websites reported a 5,609 percent increase in interest in the film in January: the ‘this is what could happen’ effect.

So given all the lockdowns, enforced absences and general drudgery of the last eight months and counting, it’s kind of fitting that the international theatre community are choosing plays that deal with isolation.

The O’Byrne/Burns show
Fergal O’Byrne is the author of Extremophiles (Oct 21-Nov 21, Mon-Fri 19:30, Sat 17:00,Tue & Thu 13:00; Krudttønden, Cph Ø; 205kr, teaterbilletter.dk, concessions available; that-theatre.com), That Theatre’s autumn production, and the Irishman freely admits that its central premise of a group of people living remotely on an Antarctic research station was dreamt up long before the coronavirus pandemic started.

“I really did not envisage how apt the whole idea of people living in isolation would be,” he said.

“A few drafts had been finished before the true understanding of how COVID would impact our lives kicked in.”

For O’Byrne, Extremophiles will be the first of a trilogy That Theatre will produce over the next two years, with the second play, ‘Rub-a-Dub-Dub’, where the isolation is equally frosty but this time in the British countryside, slated for next spring.

“This is as good as it gets quite frankly. It is hard enough to get a production company interested in one play but to commit to a trilogy is fantastic,” he enthused – and with good reason, as That Theatre stalwarts Sira Stampe and Benjamin Stender have been cast alongside Burns under the direction of Claus Bue.

“The plays are all thematically linked and it is great to have the consistency of vision that Ian and his creative team will bring to the productions.”

The primary theme of Extremophiles – “the effects of climate change and the impact of geo-political tensions on the likelihood of us continuing to exist as a species” – couldn’t be more time-sensitive either.

O’Byrne cites Interstellar, The Day After Tomorrow, Contact and (perhaps a little worryingly) Alive as influences on his script, but it is perhaps Ian Burns, cast member and artistic director, whom he owes the biggest debt to.

“Ian is a breath of fresh air,” he affirmed. “He read another play of mine and was straight up and said it was not for him, but he liked the writing style. He left the door open and when I sent him ‘Extremophiles’, he immediately got what I was hoping to achieve.”

Burns remembers the first script well. “I liked it, but couldn’t see who the audience would be. Then he sent me three plays that got my juices flowing,” he recalled.

“It’s rare that a writer and a theatre company click in the way that we have. He is a great talent, and I’m proud that we’ll be the first theatre company to present his plays. I have no doubt that other theatre companies will produce his plays for years to come.”

It started in Sarajevo
Sue Hansen-Styles and Serbian playwright Tanja Mastilo might contend that good chemistry is not that rare, although they’d struggle to match the wordplay of the Burns/O’Byrne connection.

This column heralded them as Copenhagen’s answer to Robert DeNiro/Martin Scorsese in 2019, and Mastilo duly delivered the goods with Mairead, a thrilling, inventive play that delighted audiences with its intrigue and wit.

It was her third play for Hansen-Styles, the creative director of Why Not Theatre Company, and next month they are returning with number four, The Cheyenne are Leaving (Nov 13-Dec 5, Mon-Fri 20:00, Sat 17:00; Teatret ved Sorte Hest, Vesterbrogade 150; 205kr, concessions available; whynottheatre.dk).

And just like Extremophiles, isolation is at the heart of this psychological drama. Set in a world destroyed by war, a reclusive, reactionary writer feels invaded by the arrival of a mysterious young man: an analogy of Europe’s struggle to welcome the recent surge of refugees.

“I finished this text in December 2019, so the isolation theme wasn’t a deliberate choice really,” revealed Mastilo.

“We had a first read-through in February, and then again in May, and the two experiences were wildly different; it was almost surreal. We realised that the play had got a new dimension that we weren’t really aware of before or in control of anymore.”

But Mastilo hopes it won’t distract from her main theme: the consequences of war, and most notably the loss of home.

“When the Migrant Crisis began [in 2015] I found it interesting to see that the dominant discourse in European media was ‘They’re coming’,” she recalled.
“But very rarely would anyone bother to tell the story of ‘They’re leaving’ – how absolutely horrible and frightening it is to be forced to leave your home; to see your home destroyed and burned down.”

Sarajevo-born Mastilo had to leave her homeland as a child when the Yugoslav Wars broke out.

“I’ve personally been through something similar – and that kind of experience scars you for life,” she said.

“I’ve lived in different places ever since, and although I feel at home in quite a few of them, I often can’t shake the feeling that home is something I’m yet to find. And it will probably always be like that: the endless search for something long lost.”

READ MORE: Theatre Review: Who knew being British, or even shy, could be so much fun

In the first, a 2017 thriller about sex, alter-egos and identity by David Cale, Joseph Sherlock directs Jody Fish as the American living a double life as a Brit, and in the second, a 2019 coming-of-age black comedy by Michael Ross, Jeremy Thomas-Poulsen helms Daniel Neil Ash in the role of Calum – a young man dealing with bullying, humiliation and being an outsider – in what has been described as a “one-man showstopper”.

According to Thomas-Poulsen, the plays complement one another perfectly.

“Both are living a form of denial. Harry Clarke feels that he is living in the wrong nationality, so he creates a British persona which he uses to explore his inner truth, while Callum rejects the label that the community gives him,” he contended.

“Callum rejects society limiting his social footprint, while Harry rejects the limitations of society by becoming who he has always wanted to be. Although they might seem at odds with each other, they are actually both stories about coming out and coming to terms with your inner truth.

Thomas-Poulsen is confident the contemporary stories will “show an interesting new angle to the question of what is LGBTQ+ theatre” – progress from the “tropes of ‘gay men being effeminate best friends’ and ‘butch lesbian handywomen’ to fuller more developed characters central to the storytelling”.

“Harry Clarke as a character is conspicuously free of worry about issues of sexuality, and it’s that absence which brings questions to the minds of the audience,” added Sherlock.

“They provide and project their own thoughts into that empty space, which encourages reflection and thought.”

Likewise, The Shy Manifesto is a coming out story, but not like ones you’ve seen before, explained Thomas-Poulsen.

“It deals less with the struggle of a character coming out to society and being shamed for it, instead focusing on the character’s internal struggle of coming to terms with his identity in a world that will accept him no matter what.”

We were making great progress … but then 2020 came along, and the isolation has returned!