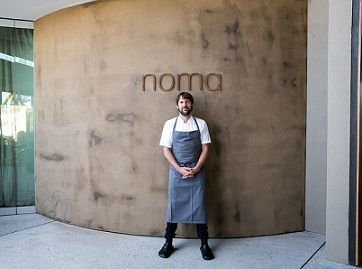 Redzepi at the helm of Noma is one of the new Danish gastro superstars (photo: City Foodsters/Flickr)
March 13th, 2019 2:10 pm| by Paul McNamara

Yesterday the government announced the launch of Gastro 2025 – a plan that seeks to keep Denmark at the gastronomic epicenter for both tourists and star chefs.

In recent years, Denmark has become one of the leading countries in the field of gastronomy. According to the ministry for the environment and food, a quarter of the tourists that come to Denmark put food experiences, restaurant visits or gastronomy as a reason for choosing to visit the country.

Superstar chefs
“Over the past 15 years Danish chefs have managed to put Denmark on the gastronomical world map,” said minister for the environment and food Jakob Ellemann-Jensen.

“Chefs such as René Redzepi, Rasmus Kofoed and Kenneth Toft-Hansen have become superstars in the culinary world, and the government wants to add even more to this list.”

An academy
Part of the plan includes launching a gastronomy academy in Denmark – with the aim of promoting gastronomic innovation and attracting international star chefs.

Overall the plan includes seven initiatives which in addition to the gastro-academy, include funds being allocated for concentrated marketing, culinary diplomacy, export promotion, a gastronomic travel team, culinary development and a World Food Summit.

The seven initiatives are based on recommendations submitted by the Team Gastro group to the government in February 2018.

Going all in
Horesta, the trade association and employer’s organisation for the restaurant, hotel and tourism industry in Denmark, has thrown its support behind the initiative.

“Gastronomy is one of our best cards when it comes to attracting tourists and therefore it is important that we develop and protect Denmark’s position through investment in the industry and our greatest talents,” said its head, Katia Østergaard.

“We are in a gastronomic golden age, and it will undoubtedly get a huge boost with these new resources and this political focus,” she added.