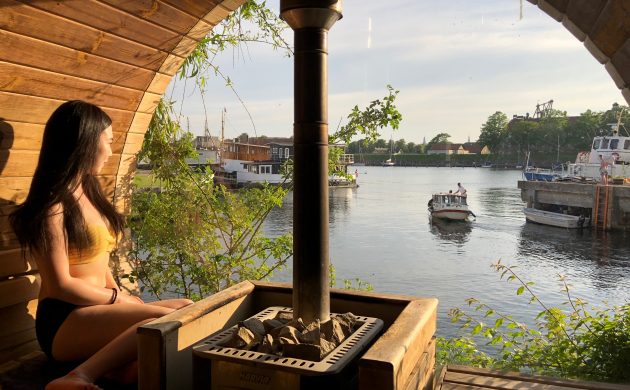 On one of the many islands found in the city of Copenhagen, where the shades of the old grey industrial past haven’t faded away, a blue cottage is nestled among wooden decks and boats. With its fairy-tale aesthetic, La Banchina restaurant stands out by the entrance of the oh-so-popular Refshaleøen.

Nevertheless, on first impression, it’s hard to imagine that such a cosy and relaxed vibe lies in store behind the façade of the rustic blue house, which brings with it a bit of ‘je ne sais quoi’ charm.

When owner Christer Bredgaard was first introduced to the abandoned place, it was only a blue shell with a lot of bushes in front where workers of the shipping industry used to wait for ferries.

From farm to table

In 2015, Bredgaard turned the place into a 16-seater restaurant and wine bar with a sauna, focusing on serving only “natural, organic, biodynamic and locally sourced ingredients”, whilst prioritising sustainability in every aspect and area of the restaurant.

In the backyard, visitors can observe a small greenhouse located behind the kitchen, where the chefs source the herbs and veggies used in their daily breakfast, lunch and dinner menus.

Although, officially there are 16 seats, guests can wander around the venue and sit wherever it feels hygge. Tables in the garden are popular with hungry diners, while the dock is full of sunbathers in the summer or whenever the sun is out. While the edge alongside the backyard overlooking the canal is the spot for the braves who want to take a dip and refresh.

Not trendy for the sake of it
Considered decisions are made to be sustainable at La Banchina. Vegetable offcuts are used for stock, locally-sourced ingredients are delivered in reusable bags, and the trash bins don’t use plastic bags.

The communications manager proudly explains: “We have been saving around 500 kilos of plastic every year. It’s fun as well because you are constantly challenging yourself.”

Everything at La Banchina, from the tables to the food, comes from small local farms and fishermen. The wine is sourced only from small artisan and independent wineries, which primordially offer natural varieties. In their words, their wines are not only there to quench your thirst, they “span from easy-drinking to serious thinking”. And lastly, their bread is delivered fresh every morning from sister bakery Il Buco.

General manager Russell Schaper-Kotter reveals they’ve recently been in talks about bringing some bees to harvest honey to remove sugar from La Banchina, which means a far more sustainable future lies ahead.

The barrel sauna beside the kitchen is perhaps one of the most cherished elements at La Banchina.

On the door small rules such as “swimwear is optional” are written, reflecting the Scandinavian culture of the venue. Changing facilities are nowhere to be found, but as La Banchina says: “Don’t be shy”. Nakedness is often seen at La Banchina.

Another one reads: “The queue is self-managed,” as sauna-goers are encouraged to have a chat with others to see who’s next and be courteous to one another.
Taking a leap into the sauna on your visit to La Banchina is an unmissable social experience when in Copenhagen. Often you’ll hear discussions on what’s the most Nordic way of enjoying the sauna – from how to keep the wood burning in kiuas to how to use kiulu.

But it is also about taking the time to relax. While the heat sinks in, sip a glass of wine and admire the scenery through the big window.

Mangiamo?
As the name suggests, La Banchina serves Italian-inspired food paired with organic wines and no meat, only fish. Breakfast menus include old favourites such as croissants and cinnamon rolls, as well as rye bread with egg or sourdough with ham and cheese. However, each month there might be variations, so be surprised, or check the website before heading over.

From October 25, designed especially for the winter season, La Banchina has crafted a 12-course tasting menu, with a suggested wine pairing of five glasses. This new edition will be available from Thursday to Saturday evening and bookings are highly recommended.

Look out for the pop-ups

I visited La Banchina on a weekend in September on maybe the last warm day of the year. The dock was brimming with unique flavours of Korean food with a bit of a La Banchina twist.

Kala, a Korean-American kimchi expert, had been wowing customers with her exotic dishes at four pop-up collaborations.

In certain Korean dishes, meat plays a big role, but the chef was still able to keep the authenticity of the flavours, and the mission of La Banchina, by not using meat. She offered a veggie wrap ‘Ssam’, with soy sauce-seasoned squid and veggie leaves with ‘Ssamjang’ sauce, making a perfect Korean-Nordic fusion.

Collaborations with foreign chefs are a regular fixture at La Banchina, so it’s good to keep an eye on their social media. And it is such collaborations that makes La Banchina a corner of hygge and delicious cuisine.

Drop by when you crave an organic wine and mouthfuls of seafood, or simply want to try some winter bathing in the vicinity of a welcoming sauna.