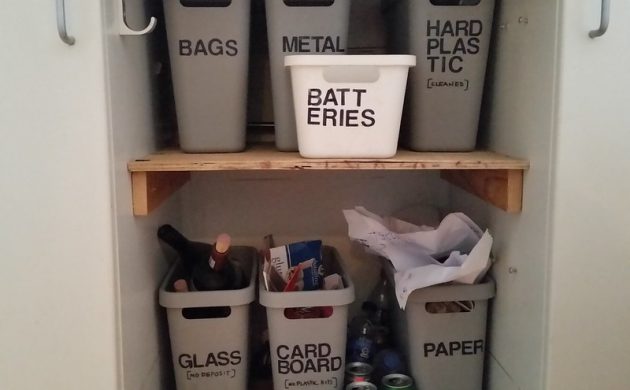 You bought from multiple shops, so it only makes sense …(photo: Mikael Colville-Andersen/Flickr)
May 19th, 2020 12:39 pm| by Valmira Gjoni

People living in Denmark will soon be required to sort their waste into ten different types, according to the government.

One of the biggest goals of the new directive is to reduce the annual amount of plastic incinerated – a 80 percent reduction goal by 2030.

Some 370,000 tonnes are annually incinerated, resulting in millions of tonnes of CO2 emissions. If left unchecked until 2030, it will reach 1.5 million tonnes – 36 percent of the country’s total discharge.

New recycling system
The new recycling system will apply to all buildings, so residences, including summerhouses, and workplaces. Until now, people have been obliged to recycle three to eight different types of waste.

Individual municipalities will decide how exactly the waste will be sorted.

Government earmarks billions to housing and education, but is it enough?
Following its pledge concerning the climate, the government has earmarked billions of kroner to housing and education (most notably internships) and climate. An extra 30 billion kroner will be spent on public housing renovation, while 6.1 billion kroner will be spent on education – most notably on internships through company subsidies as part of a scheme called Employers’ Education Grant. However, the right bloc does not think it is enough – particularly in terms of helping companies. Venstre believes VAT demands should be halved for the remainder of 2020.

DHL Relay Race 2020 cancelled
The 2020 DHL Relay Race – a series of annual charity runs across Denmark, which over five days at the end of August attracts around 100,000 participants in Fælledparken – has been cancelled. Dorte Vibjerg, the CEO of organiser Sparta Athletics & Race, tells TV2 the cancellation will cost it 30 million kroner and put its future at stake.

New job for Countess Alexandra
Countess Alexandra yesterday started a new job as the director of client programs at Bang & Olufsen. The former princess and wife of Prince Joachim will oversee strengthening the brand of the electronics company, which only a week ago announced a loss of 400 million kroner. She will also be expected to attract new customers and develop customer programs across marketing and sales. This summer her younger son Prince Felix is turning 18, thus marking an end to the financial support she received from the Royal Family.

Venstre struggling in the polls
In contrast to the government party Socialdemokratiet, which hasn’t been polling this well since the 1980s, Venstre is struggling following its change of leadership, reports BT. After receiving 23.4 percent of the country’s votes in the general election last year, the party is now polling at 20.4 percent (albeit with a 2.5 percent statistical uncertainty). This bodes badly for the blue bloc, which only has a 40.3 percent share of the nation’s votes, trailing the red bloc on 58.3 percent (3.0 percent uncertainty).