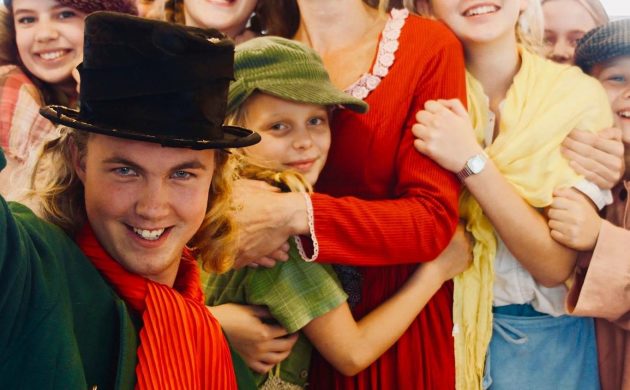 Are you harbouring a budding Shirley Temple at home? Do you have a child who can’t contain their energy or passion for performance and entertainment? Because SceneKunst might be the right fit for your family.

Last week we met up with Russell Collins, the co-founder of SceneKunst – a musical theatre school for children aged 4-18, which focuses on singing, dancing and acting – to discuss how it is faring, particularly in light of the Coronavirus Crisis.

Beginnings of an empire
Collins made the move over from London to Copenhagen in February 2008 with his wife,  Christina Anthony, and within a month they had founded their first theatre school in Køge. It has since  blossomed into a theatre empire.

Today SceneKunst comprises 22 theatre schools across Zealand in  Roskilde, Hellerup, Lyngby, Vesterbro, Østerbro and Solrød. While the majority are Danish, it operates international schools in Hellerup, Vesterbro and Østerbro.

It offers mini schools for 4 to 6-year-olds, along with main schools for 7 to 18-year-olds. The students attend school for three hours a week, spending an hour each on the three main components of musical theatre: dancing, singing and acting.

For Collins, it is always a busy weekend. On Saturdays, for example, he welcomes 60 Danish students from the main school and up to 15 from the mini school to his location in Hellerup from 10:00-13:00 (minis from 11:00-12:45), and then repeats the format in the afternoon with international students.

Professional standards
The season always culminates with a big show put on by the students, which is performed internally to family and friends. Without fail, all the students have a part.

“We do shows at a high level, so we normally go out to a professional theatre. And the whole arrangement is very professional with regards to the microphones, the costumes, the set. It is all produced professionally,” enthused Collins.

“One thing that sets SceneKunst apart is that all the teachers are professional. I’m a professional actor and director, and so is my wife, who is Danish. We actually met at drama school in London.”

As well as giving the students a thorough grounding in the three components, a lot of work goes into preparing for the performances – so it would have been a shame to see it all go to waste due to the Coronavirus Crisis.

“This year we’ve been working on ‘Guys and Dolls’ at all of the schools, and we should have been in theatres now. Today [June 5] would’ve been two shows.”

Importance of creativity
SceneKunst helps to address the vacuum that used to be filled by such disciplines at most schools, contends Collins.  In fact, a recent governmental report drew attention to how many public schools can no longer guarantee an education in music.

‘’It is very easily underestimated how important creativity is. We’re all creative in a sense –  everyone has the capacity to enjoy creativity and I think sometimes in school creativity is the first thing to go.’’

According to Collins, having a balance between a creative education and academic education is cardinal, but is often left by the wayside. He thinks this is a huge mistake.

“In today’s world we need creativity more than ever. Creativity is very often thinking outside the box, and thinking about things differently, and that comes with solving problems in many industries in today’s society,” he said.

“All of our brains work differently and, in a way, academic learning is just one way for a brain to work. But someone else’s brain might think differently – they might think in pictures instead of words. That doesn’t mean that they are any less capable than someone who is good academically.’’

Embracing life
But there is far more to SceneKunst than just preparing the children for the stage – the education is also helping them to embrace life.

“Our joy comes from knowing that we’re making a difference with the kids … in the end we become a bit of a family,” enthused Collins. “They get a lot of confidence from being on stage – it improves  their self-esteem.”

SceneKunst strives to include everyone – even though the children tend to enter the school at vastly different levels. They are all given a speaking part, and this season there are two actors for each of the main roles.

“We make them proud to be good at something,” he said. “And it introduces them to culture in a way that’s not only in the performing but also understanding of theatre, genres, different plays, performances.’’

The ability to adapt
Like most businesses, SceneKunst has been impacted by the COVID-19 pandemic.

At the beginning, it started with just cancelling some Saturday lessons, but it soon dawned on Collins and his team that they had to find a way to replace the Saturdays. After a lot of hard work, they managed to successfully move all of the schools online.

“So what we did is that we met everyone on Zoom, took the register like normal, rang the bell like normal, and then we actually put them into breakout rooms. So we had the small ones in one room, the middle ones  in another room, and the big ones in a third room, and then after the class the teachers would rotate,” revealed Collins.

“We had six weeks of being online together, and everyone actually said it went better than they thought it would go. We needed to do that to survive – if we’d just cancelled the classes, it would’ve been very difficult.”

The regulations made practising and performing the production difficult, but Collins adapted well to the circumstances and all the schools managed to perform their shows –  thanks to lots of help from the SceneKunst community

“One of the great things about SceneKunst is that we have a lot of loyalty. Many parents have been with us for many years and we have had many great experiences together,” he said.

“Overall, it’s been important to teach the kids that it’s okay to have to adapt,” contended Collins.

“I mean we’re entrepreneurs in a way, and I think that one of the things about being an entrepreneur is that you are able to come up with a plan and follow it through, whatever the circumstances.’’

The summer is young
Aside from the regular season, SceneKunst also has a popular summer camp schedule to fulfil and, with the rules somewhat more relaxed than they are, Collins is hopeful the children will enjoy them to the fullest.

In total, SceneKunst will be organising five summer camps, although all of them are sold out bar the Danish one in Week 32. “Actually we’ve been having a lot of people signing up for them: two to four people every day!” exclaimed Collins.

Collins has absolutely found a way to make the best of a bad situation by being able to quickly move online and change all of the teaching to function through a screen. ‘’The most important thing to teach the kids is that it’s okay to have to adapt.’’

He also hopes that the camps, with everything that has happened around the world lately, can act as a sort of healing environment for children who have probably been stressed and worried about the situation.

It has been fitting that one of SceneKunst’s pandemic projects has been writing extra lyrics for Elton John’s ‘I’m Still Standing’, which is symbolic of the way that the school has managed to push forward in these trying times.

And even expand, as SceneKunst will be venturing outside Zealand for the first time in its 12-year history later this summer, as plans have been confirmed to open a school in Odense on August 29.