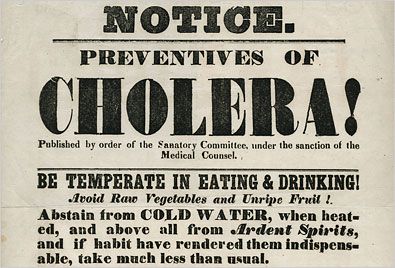 A sealed sample bottle containing liquid excrement from a Danish patient infected with cholera during an epidemic that raged in Copenhagen in 1853 might be able to provide scientists with new information on the disease.

READ ALSO: The worst toilet in Scotland? Try digging your hands into the oldest toilet in Denmark!

Peter Kjær Mackie Jensen, an associate professor at the centre for disaster research at the University of Copenhagen, wants to compare the capital’s epidemic with ones that tend to currently take place twice a year in Bangladesh.

Precious bodily fluids
Polluted drinking water is usually the major carrier of cholera. If a person gets a large amount of the cholera bacteria in their intestinal system, they begin to produce a poison that causes the cells in the walls of the intestine to secrete enormous amounts of fluid. They can excrete 12-13 litres of fluid and intestinal cells per day.

The bottle had been labelled by the Norwegian doctor attending the patient at the cholera hospital on Sankt Annæ Plads in 1853, so the contents and context are known.

“We know the patient had a severe attack of cholera, but we also know that he or she survived,” Jensen said.

“Perhaps the cholera bacteria are still alive. That would be amazing. It would give us a completely new insight into the development of the disease,” Jensen added.

Broaching the subject
At the moment, the researchers are applying to several funds for economic support to enable them to open the 160-year-old sealed bottle.

At the Niels Bohr Institute they are trying to work out the best way of drilling a hole in the bottle without destroying it.

“We have no way of knowing whether it will explode when we begin to play around with it,” Jensen said.

“Perhaps a fermentation process has taken place that has caused massive pressurisation. We might risk being covered in cholera-infected excrement.”