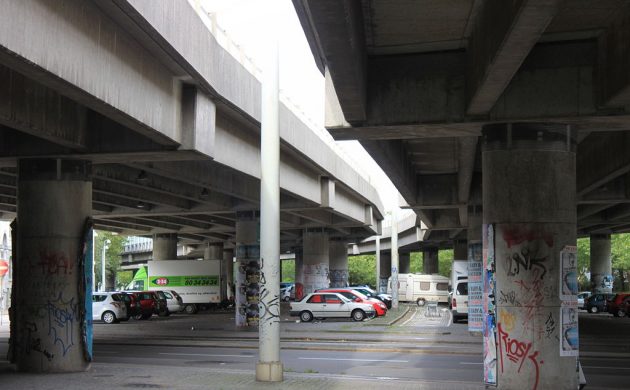 Most Copenhageners who cycle have taken a shortcut through here at some point (photo: Victor Valore)
January 22nd, 2021 12:05 pm| by Ben Hamilton

A new proposal backed by the municipalities of Frederiksberg and Copenhagen will remove half of the Bispeengbuen overpass. This means one of the two concrete bridges will be torn down, resulting in two lanes on each side, instead of the current three.

According to Rambøll, the remaining structure will still be able to handle the traffic, while the proposal also promises new green areas.

Once the proposal is approved by both municipal councils, the demolition work can begin.

Long time in the making
The debate to demolish the bridge started when it was estimated its restoration would cost around 200 million kroner. In light of this, politicians and local players voiced support for a complete demolition instead of a restoration.

The new proposal will only cost around 1.5 million kroner, which is cheaper than either removing the whole arch together or restoring it.

Nevertheless, long-term plans to replace the overpass with a tunnel have not been ditched.

Graffiti at Assitens Cemetery costing tax-payers a fortune
Copenhagen Municipality spends 234,948 kroner annually on removing illegal graffiti from Assitens Cemetery’s iconic yellow walls. In response, it has set up various legal walls for street art in Nørrebro. Meanwhile, many continu to debate whether the graffiti is vandalism or art.

Fewer vaccines, different priorities
Copenhagen has received fewer doses of the coronavirus vaccine than expected. It has chosen, therefore, to make front-line workers a little longer and instead administer a second dose to those who have already received the first jab. Nobody else will receive the vaccine until February.

Malmö says no to transport link partnership proposal
Malmö’s mayor Ilmar Reepalu opposes the co-financing, co-owning proposal recently announced regarding a possible transport connection between Helsinborg and Helsingør. He has emphasised the importance of connecting the two cities, but believes building it though loans, instead of the proposed plan of co-financing.