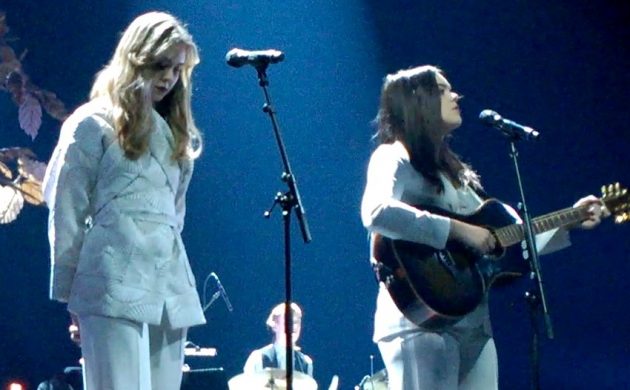 Snakeskin boots, slide guitar, jangly female harmonies and embroidered collars would all be at home on a Nashville stage. First Aid Kit welcomed these elements to the Orange Stage on Thursday.

The ‘Roskilde blues’
Four pm is a difficult time for a show at Roskilde – right before dinner, people are still hungover and the weather on Saturday had taken a turn towards the more miserable. This showed as a slightly subdued crowd gathered to see the Swedish sisters ten years after their first Roskilde experience.

I stood alongside people who were clearly fans of the band, evident from their knowledge of the song lyrics. I wondered at this point if maybe First Aid Kit would have suited a smaller, more intimate stage setting to really connect with the crowd.

A complete 360
And then something changed. They settled into the size of the stage and to the cold. Their voices began to blend into one syrupy tone. People began to gather. The crowd doubled and then the performance really began.

Without the knowledge that these were two Swedish sisters, their sound could be mistaken as coming from some tiny American town, not Stockholm. The elements of a great country song – lyrics concerning love or revenge, extra percussion, rich harmonies, and references to religion, family and country – were all present.

A song highlight had to be ‘Fireworks’, a favourite with the crowd that soared above the outside noise and prompted all those feelings of nostalgia that an excellent performance evokes – even if this was the first time many were hearing the song.

Trombones and slide guitars
A special mention should go to First Aid Kit’s support band, who aided the two girls exactly the way it should be done. They had a presence but it was not overpowering. With two percussionists, a keyboard player who moonlighted as a trombone player, and a guitar player who rocked on the slide guitar, it was an admirable effort.

By the end of their set, I suddenly realised I was pressed into the crowd, surrounded. They had attracted a crowd to rival the headliners. And that is a sign of a good festival band.