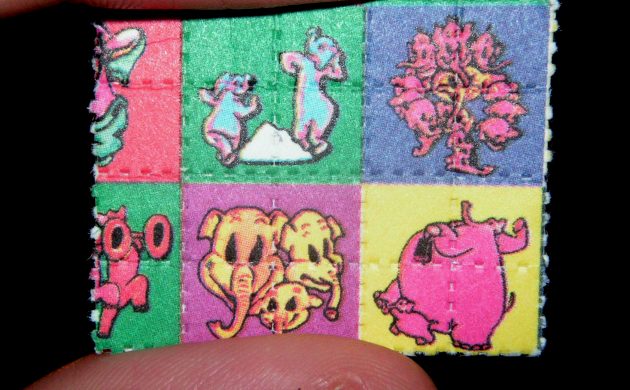 Very often it’s the sub-plot of a conspiracy theory film. Our protagonist uncovers evidence of top secret tests carried out by a secret service or military in which the guinea pigs (not literally, although that might depend on the dosage) were subjected to large amounts of LSD and instructed to storm a machine gun turret – or something like that.

A Wikipedia description of the 1990 Vietnam War film ‘Jacob’s Ladder’, for example, contains the line: “To test the drug’s effectiveness, a dose was secretly given to Jacob’s unit before the battle, causing some of them to turn on each other in a homicidal frenzy.”

But often the reality was completely different. Last year, the British media reported how LSD tests on Royal Marine Commandos left the majority of them “flat on their backs, helpless with laughter, or staggering against trees”. After 70 minutes, their commander conceded defeat and “relapsed into laughter” himself.

The overall conclusion of the Chemical Defence Advisory Board was that using LSD as a weapon of war was “more magical than scientific”.

Before the Beatles dabbled

The British military and the Beatles weren’t the only ones experimenting with the drug in the 1960s, as Denmark was also in on the act.

And now more than half a century later, psychedelic drugs are inching in from the cold, with LSD back in the vanguard.

A recently published study by Aarhus researcher Jens Knud Larsen, which has retroactively re-examined one of the largest ever Scandinavian studies of LSD, questions the role the psychedelic drug can play for future psychiatric treatment.

Favoured by the spooks

Lysergic acid diethylamide (LSD) was synthesised in 1938 by Swiss chemists Albert Hofmann and Arthur Stoll. Since then, the hallucinogenic drug has amassed international notoriety in psychiatry and society.

The drug, which binds itself to serotonin receptors in the brain, takes only a tiny dose – around 100 micrograms – to create strong effects that can last 12 hours or longer.

In the 1950s, the US Central Intelligence Agency (CIA) searched for avant-garde methods to control consciousness as a psychological weapon during the Cold War, and for a time LSD became known as a ‘truth serum’.

In small doses, LSD seemed to be able to reveal deeply-seated secrets and undermine patterns of behaviour, according to a 1985 study, which gave rise to the drug’s possible brainwashing effects.

Contentious clinical trials
As psychedelic drugs grew in popularity among the public in the 1950s and 60s, it also became widely used in psychiatry as it was thought to evoke unconscious material.

Frederiksberg Hospital in Denmark soon became a major centre of LSD research in Scandinavia, studying the effect the drug had on nearly 400 patients in 1964. According to the Danish State Archives, only a few complications were reported, including a few suicide attempts and a homicide.

The centre’s attitude towards LSD research remained positive, and the treatment continued in Denmark until the mid-1970s – almost 10 years after the drug became internationally contentious.

Twenty years later in 1986, the Danish Parliament passed the LSD Damages Law, which aimed to counteract any LSD-inflicted harm by the patients involved in the clinical trials of the 60s. These trials were criticised as coercive due to the lack of informed consent from patients.

The 151 applicants of the 400 who were treated all received financial compensation for apparent long-term, severe side-effects of the LSD treatment, which included flashbacks, according to the Danish State Archives.

The amount of compensation ranged from 50,000 to 510,000 kroner. While the patients were paid back, the public and the medical community were still left in the dark.

Effective therapy?
Recent studies have suggested that LSD treatment is safe and effective when assisting psychotherapy for illnesses such as end-of-life anxiety among the terminally ill, PTSD, cancer, addiction and cluster headaches.

Of the 151 patients who claimed state reparations under Denmark’s LSD Damages Law, many suffered from pre-existing mental health issues, and thus further research must be done to understand the true effect of the drug.

The fabled enlightenment drug of the 1960s remains an unknown as a medical treatment. Though interest in the LSD’s possible positive effects have resurged in new medical research, the jury is still out on the long-term impacts it exerts on the brain.